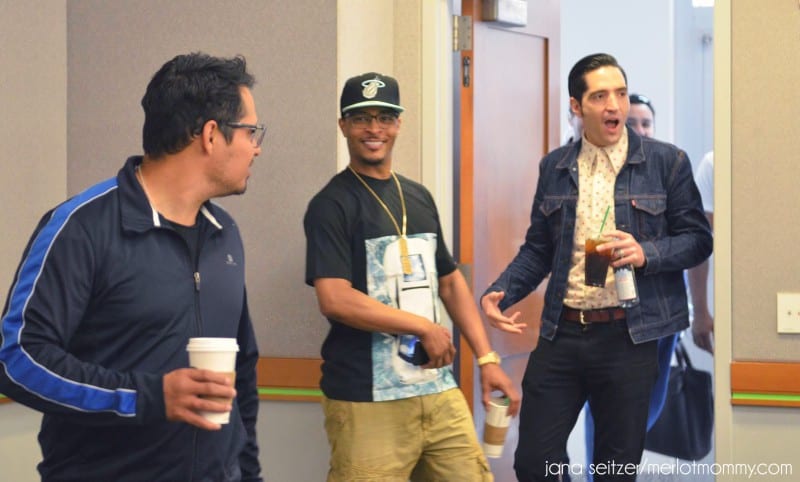 We knew we were in for a fun interview when Michael Pena, T.I., and David Dastmalchian came into the room, taken aback by the applause from us. As Dave, Kurt, and Luis, three ex-cons with a brotherly banter – they play a key role in Marvel’s Ant-Man (in theaters July 17th). And they steal many of the film’s scenes with their on-screen chemistry and quips. 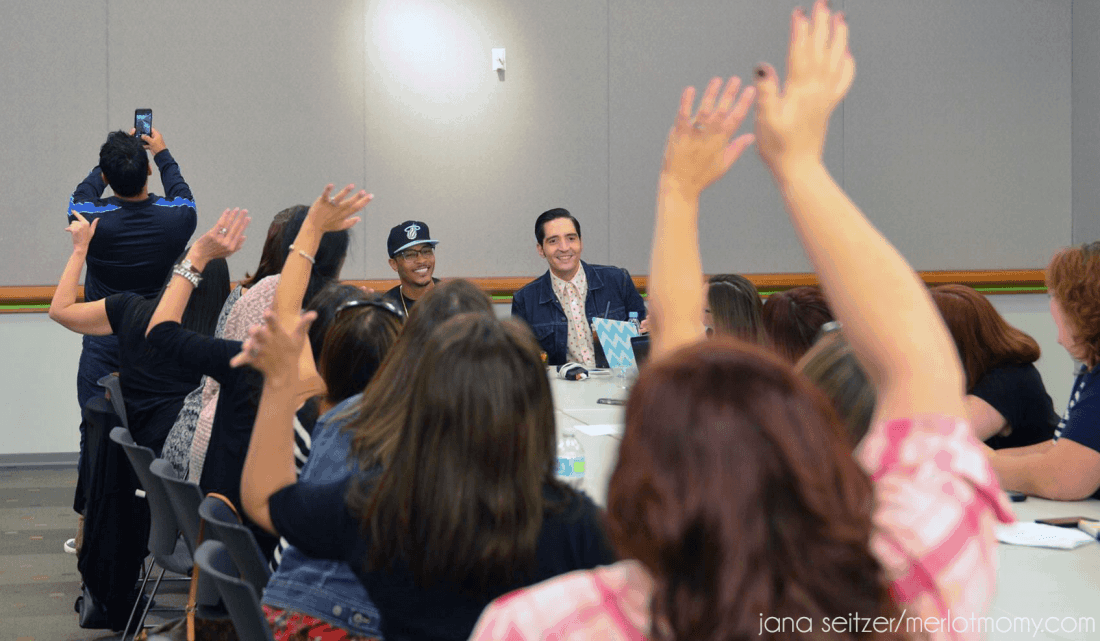 Right off the bat Michael pulled out his iPhone and decided he needs a selfie, which was then quickly added to Instagram.

Starting with David Dastmalchian, who plays Russian computer hacker Kurt, we needed to know what exactly went into making his hair into the pompadour he has it in the movie. When he opened his mouth to talk I expected the same Russian accent, but I was wrong, he’s as American as apple pie. turns out his hair stylist Yvette Stone – who’s credits include The Hunger Games and Magic Mike – was right there in the room. 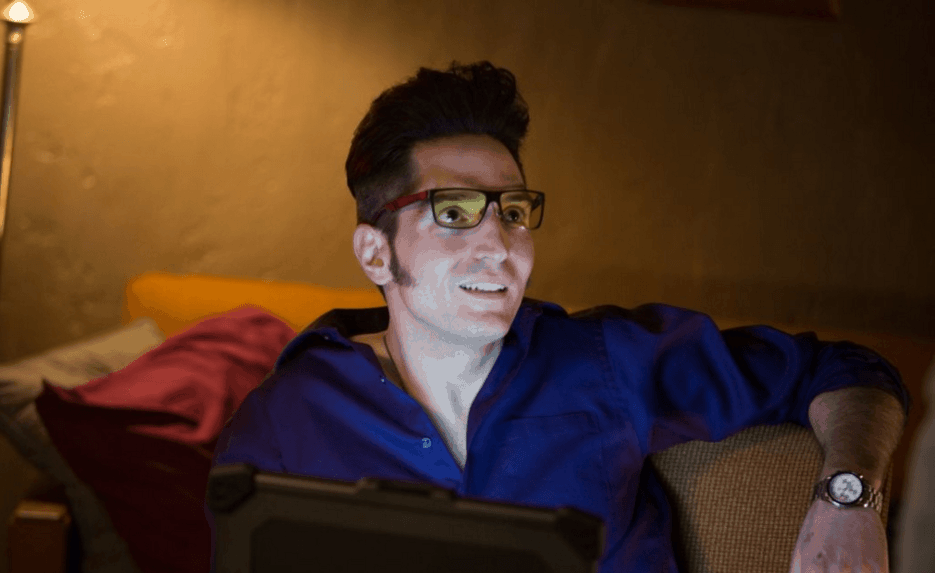 “She helped create that look for (my character) Kurt.  We got it down to 45 minutes. It starts taking a long time, but by the end of the movie like man we nailed it, and the tattoos and everything.  My–  It was amazing Make-Up Artist Greg Funk did the tattoos, but um it’s a cool thing when you’re an actor and you get the physical world that’s created for you”. 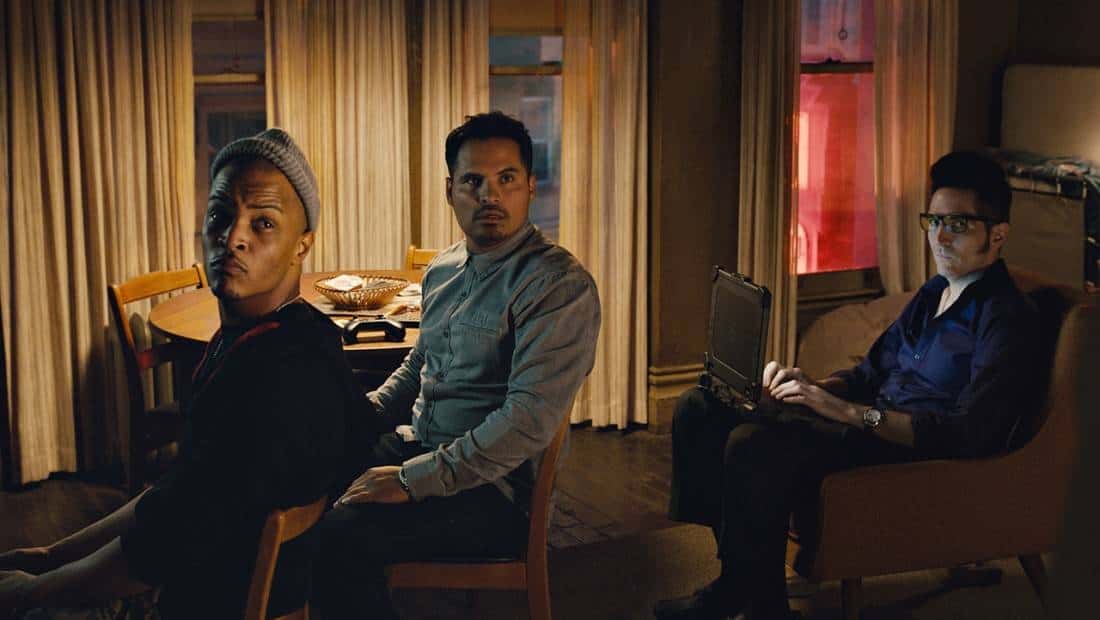 When is came to favorite scenes, it was the behind-the-scenes times that were memorable to the “Antourage”.

Related: Paul Rudd and Evangeline Lilly talk about chemistry on the set of Ant-Man

“All of the scenes you know that we did together to me were funny”, T.I. started, then turned toward Michael, “In San Francisco, It think it was the scene when Scott (Lang, played by Paul Rudd) was breaking into Hank Pym’s house for the first time. The stuff that didn’t make it on screen, [LAUGHS]  that’s, that’s the action”.

David, being a relative newcomer to big films, added “They started to just go and riff too.  And,  they made me feel really welcome immediately, which was a great feeling.  You feel more creatively free to do that. But like there were some jokes, obviously not all of ‘em can make it in the film…”.

Yeah,” T.I. notes, “So every time they’d make mention of  ‘it’s just like when we were in the cell'”, referring to Michael and Paul’s characters being cellmates – ” And we were like, ‘Oh really? Oh’….”.

These three were laughing at their jokes and we felt in on it, so the entire room roared.  Michael Pena’s character Luis is hilarious in the film a great storyteller, as seen in this clip:

He says he was always a quiet kid and surprised many of his childhood friends when he broke into show-business.

“I remember I got messages on Facebook – ‘out of all people to be an actor you’re the guy?’ I was Captain of the Wrestling team and Track Team and I loved sports and stuff.  So that’s the only way that I really made friends, but I was like kind of a nerd to be honest -it’s hard to believe”.

Michael – “Were you really?”

Michael seemed a bit embarrassed by his thought of T.I. being a “nerd”, but went on to talk about developing his character.

“I’m imitating this guy I knew in my neighborhood. And I had the blessing of going to prep school and living in the ghetto.  Is what happens or whatever.  And so I’d travel like an hour in the morning just to get to that school, come back and then all of a sudden he’d be ‘how did it go man? You want a nickel bag?’.  And I’m like, “No man, I’m good man. I gotta’ study and stuff.”  He said, ‘But if you don’t want a nickel bag it’s cool.I got your back.  A regular you know what I’m saying?’”. Michael says this as he imitated the kid from his neighborhood and sounds exactly like his character Luis.

Much like his character, Michael’s blast from the past had elaborate stories and used 50-cent words, which Michael always had in his mind he wanted to use and Ant-Man was the perfect avenue to showcase him. 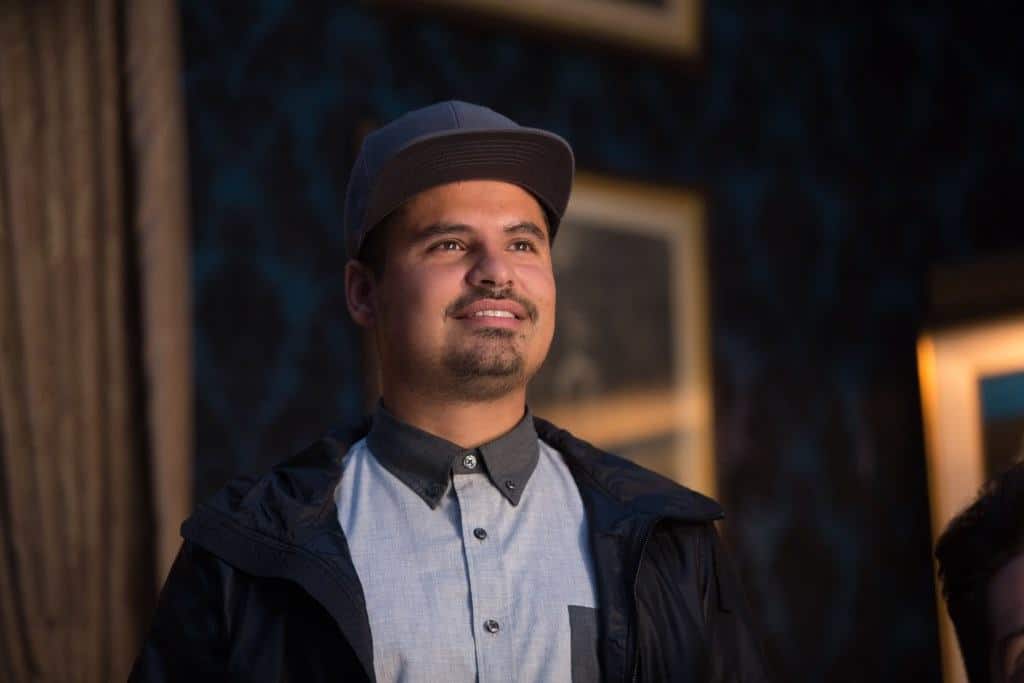 “And like literally he’s the kind of dude it was like, ‘whatcha’ do this weekend?’  And he’s like, “Uh I went to jail guy.’  ‘What you go to jail for?’  He’s like, ‘Just smokin’ weed.’  And I was like, ‘show me what happened’.”  He’s like, ‘literally I was like-‘ and he uses like big words –  ‘you know I like I smokin’ and smokin. The cop’s like, “Hey man put it out’ And he’s like, ‘No problem.'” The entire room is now laughing to the point of tears as Michael feigns finishing the joint this guy says he has And he’s like, ‘Then took me to jail guy.’  And I’m like, “Yeah dude they’re gonna’ take you to jail every time man.”.

“So it was like I was waitin’ for a movie to put that character in there.  It was odd because he’s like the most optimistic criminal that I’ve ever met in my life. But he like,  everybody loves him, but at the same time it’s like you gotta’ be kidding me.  So that’s Luis”.

David Dastmalchian’s entry to the project took him by surprise. As a new father at the time he thought he just had to continue auditioning. Little did he realize he had the role of Kurt, and it was exciting for him to be part of the Marvel franchise.

“I’ve loved comics my whole life.  And  I wanted something that my mom can go to the cinema and watch and not be terrified, because I tend to play some goofy guys. So I, I went after it and I created a voice and the character and then she liked it so I read for the director at that time and I got to read for him, and he liked it”.

He then got a call from his agent to go to Atlanta to do a test, which he thought was also part of the audition process, but it was in fact a hair & make-up test.

“I didn’t understand what that meant and I had a newborn at home, and I was very frazzled, and I was very nervous.  And I thought okay like I’m gonna’ go um and do another audition.  So I went to Atlanta and Michael was there and, and, and, and everybody else.  And I realize what they meant – I had the part. I was in”. 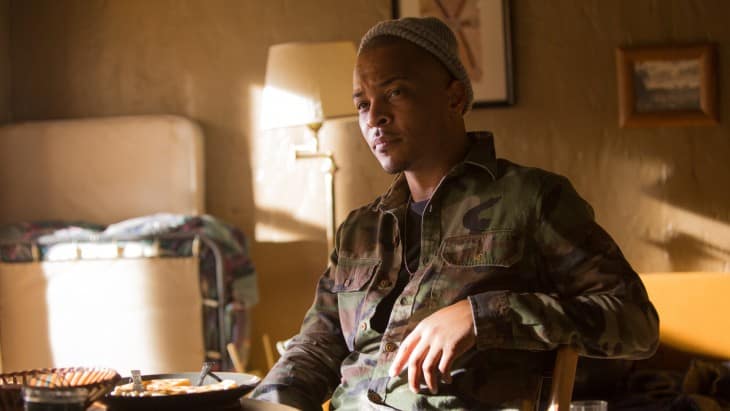 For T.I. his receipt of the role of Dave, the crook with a southern charm, was fate. Bloggers and fans had predicted he would be in the new Marvel film, and he continued to shoot the rumors down – that is, until he got a call to do a read in Atlanta:

“Maybe 2 weeks or 3 weeks before they began shooting uh I got a call saying, “Are you in Atlanta?”  “Yeah.”  “Well can you go do an emergency reading for Ant Man over at–?”   Yeah okay, I guess. I go and read and they give me a bunch of anonymous scenes to read, and they called me back.  And so then I have to find a way to re-arrange the rest of my schedule to actually take advantage of this great opportunity to do this film”.

When you see Ant-Man, you will find out what I mean when I say “The Antourage” (a term coined by David) steals the film. Their scenes make you crave for more Kurt, Luis, and Dave in future Marvel films.

So c’mon Marvel, let’s keep The Antourage alive and well.

I Went to the Red Carpet Premiere and After Party for Avengers: Infinity War And It Was AWESOME | All Mommy Wants

[…] of the Antourage (Ant-Man) David Dasmalchian and his wife Evelyn. I had met him originally while interviewing him for Ant-Man back in 2016 and instantly adored his excitement for being a part of it all. I then ran into him again last year […]