Skip to Content
2 shares
While the name John Forston isn’t yet a household name, keep a close eye on him. He’s a triple threat – a gifted actor, creative writer, and now an accomplished director. His debut short film RATED (you can stream it on Vimeo right now) has received an astonishing 21 awards in the independent circuit for writing, directing, and acting among other accolades. The best thing about RATED? It’s a family affair. RATED stars John along with his wife Christie Lynn Smith as Maggie (a truly great turn and relatable to many moms out there), and children Abby Ryder Fortson and Joshua Forston.

RATED from John Fortson on Vimeo.

In the film, Maggie (Christie Lynn Smith), a wife and mother, must find the courage to own up to her behavior when she wakes up to find that every adult has received a YELP-like star rating floating above their head. While most everyone has a shining 4 or 5 stars, Maggie’s got just 2.5 and is forced to confront the universal and deeply human need to be liked and accepted.

I can’t tell you how lucky I am to have the support of my family. My wife, Christie Lynn Smith, is an incredible actress who has starred in more than 80 of TV’s most watched shows but beyond that, she’s honest with me and supports my creative ideas always. And to have my daughter, Abby Ryder Fortson, and son, Joshua Fortson, desire to follow in our footsteps and succeed to such a high degree, is simply amazing. To be able to share your craft with your children and watch them take it and run is beautiful.

John thought of the idea for RATED one night in December 2014 when his friends were telling him about Uber and how you can rate the drivers and they can rate you. 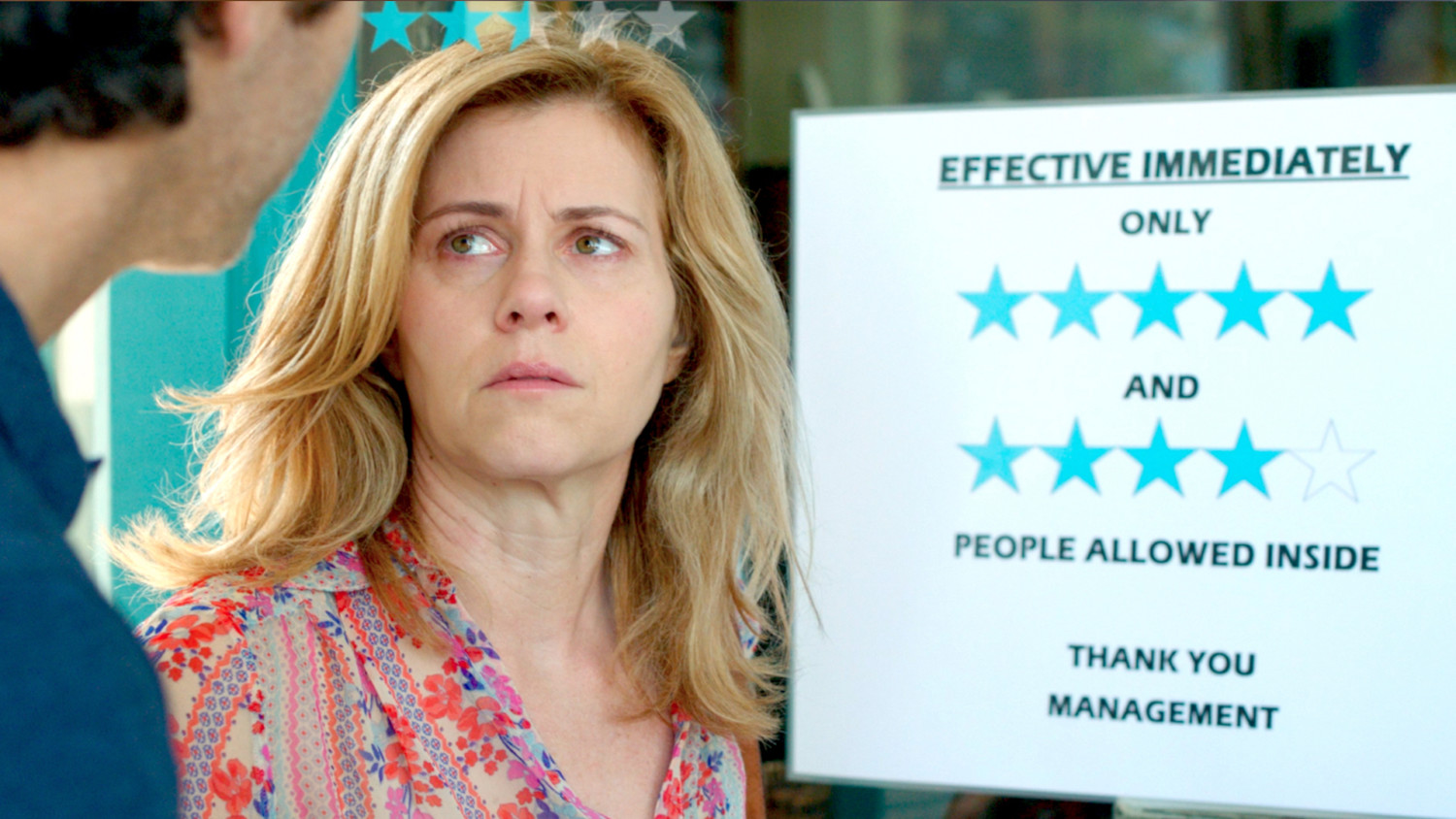 “Of course we use YELP a lot to find great restaurants and other services. And I’m always writing personal stories and suddenly thought, ‘wait a minute, what if a husband and wife woke up and were RATED like YELP with stars over their heads and what if one of them had low stars.’ ”

When I shared the idea for RATED with my wife, Christie, her eyes lit up and she immediately said, “We have to do this! Grab the iPad!” and we started improving and just talking the story out loud while recording on the iPad. At first I had suggested that the husband have the low stars, but Christie said, “No. It should be the wife. A woman with kids, mid-life, is fighting a lot of feelings and can lead her to being short with people, and her story would be more vulnerable, more relatable, and a story we don’t see everyday.” I agreed. We spent the next three months writing and rewriting and by March 2015 had the script locked. We put together our crew and started shooting April 30, 2015. And that’s what I’m talking about, instant support. I can’t thank Christie enough for that! 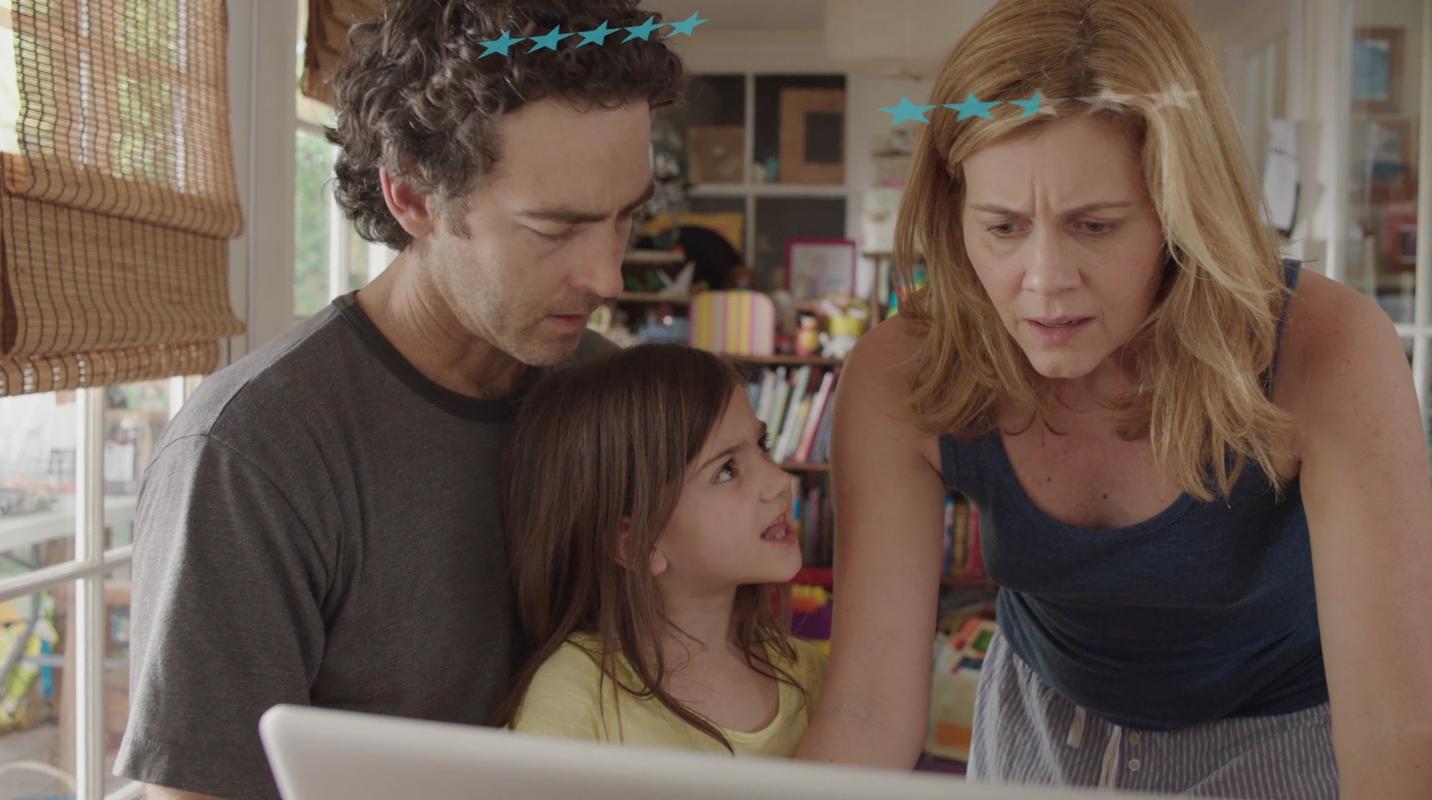 To include the kids in the film was like an adventure. “We had an entire crew take over our house. My son, Joshua, was only 3 so he went along for the ride. My daughter, Abby, was 7 and had just come off of shooting the Spielberg series, The Whispers for ABC, the first season of Transparent and then was a series regular on the Duplass Brothers HBO series Togetherness, playing Mark Duplass’s daughter. She had also just wrapped playing Paul Rudd’s daughter Cassie Lang in Marvel’s first Ant-Man film. So she was a pro by the time we were shooting. 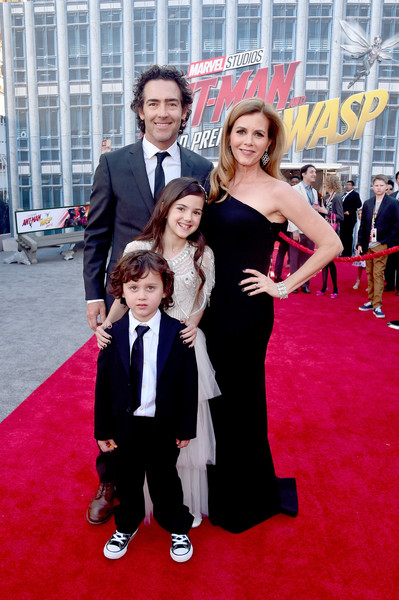 I got to chat further with John on the short film, plans for a feature version, and how his role in entertainment has evolved.

How are the characters similar to you and the family? How are they different?

Ha! You might get me in trouble here. Let me say it now, “I love my wife.” We actually are all very similar to the characters in the film. Now remember that my wife, Christie, said she should have the low stars?! Right? Well I’m proud of her for being honest with her life story and allowing this side of her, which we all have, to be on display in the short. What’s amazing about her performance is that she was able to channel her vulnerability along with her frustration at being RATED with low stars so you really care about her character. She made Maggie super relatable. And that’s Christie; she’s passionate, has a huge heart, and can get overwhelmed like all Moms, but deep down wants to do the right thing.
I’d say that although I have my moments, I’m mostly the calm in the family. (btw- Christie laughed out loud when she read this draft! I guess “mostly” is an over statement!) My daughter, Abby is super smart and uses her smartness to be honest and call you on your shortcomings, in a good way. That helps in the film to create a lot of humor. She has the funniest lines. Now that my son, Joshua, is 7, he’s doing the same thing. So they both keep us laughing and on our toes. 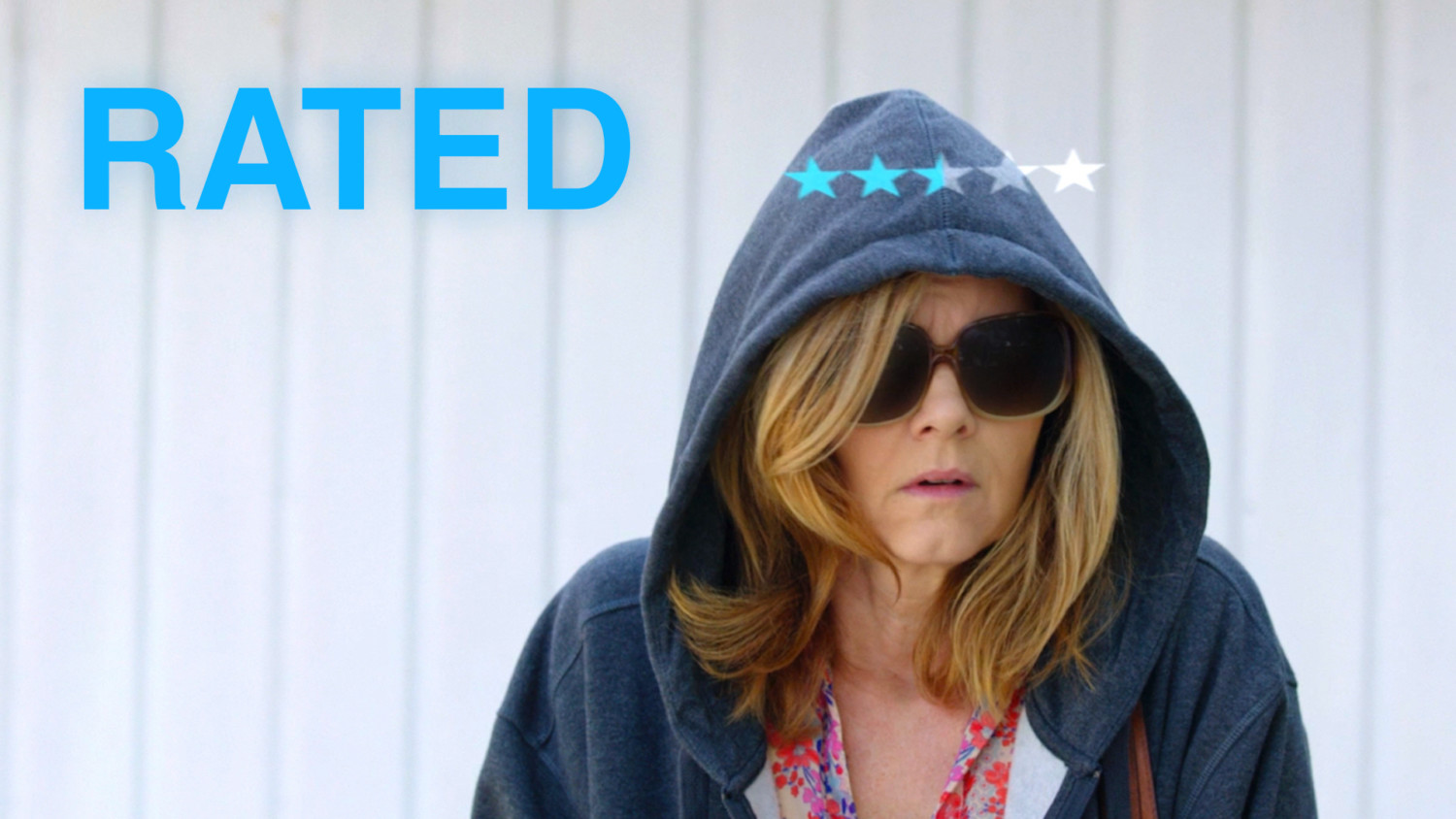 What was it like working with and directing your family? Any challenges? Funny moments?

Shooting with my family was both, incredibly supportive and challenging at the same time.  Christie and I were wearing many hats; writing, directing, producing, acting. Thus, in between takes with my wife, she would turn and ask me about catering or if I had gotten this or that done. Ha, I know I did a lot of deep breathing. Part of the job of the director is to compartmentalize everything happening in your brain so you can deal with several things happening at once and maintain calm. That was always my challenge, and it felt good to be able to do so.
And what was amazing, was that when I was shooting my scenes with my daughter Abby, Christie was there for me watching the monitor and giving me notes on my performance to make it the best. To have that level of trust and care on set from my family was amazing. Just to look at your co-stars and see your family who you love there, was grounding and heartwarming and fun. Such a unique experience.
My biggest challenge was that I had never directed before! But I had been on set so much not only as an actor, but also with my daughter Abby as her coach. So I had gotten to watch and take notes from some of the best directors in the industry like Mark Romanek, Mark and Jay Duplass, and Peyton Reed. I kept a close eye on what and why they were doing everything. And never having done directed before was actually a plus as it made me prepare everything to the nth degree, and strive to make the best film possible. That preparedness carried me through.

How did RATED change you and your family concerning your views on community and social media?

Creating RATED brought an awareness to our actions in our world around us. It helped us reflect on what other people might be going through in their day if they were acting less than sweet. Instead of being reactive, we try to be compassionate.
It made us look at our bigger pictures and not our immediate wants and desires. Not that it made us perfect in anyway but it did help us become more aware of our humanness and connection to those around us, how we affect one another which is a great thing to look at especially today with this virus that’s affecting us all. We need to be there for one another more than ever. 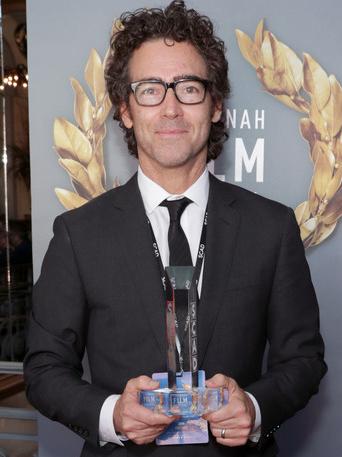 Your history in entertainment spans almost 30 years now. What made you decide to go into acting?

Like many people I came from a broken home. It was at first a loving home, and though my parents stayed loving and supportive, it fell apart. At the same time, I was really trying to find myself. I was fending for myself really, no one was really watching my sister and I when I was in high school  The good thing or the lucky thing or the instilled idea I carried with me was that I wanted to be good in school and or whatever I did. I always pushed myself. I think trying to prove myself to my father who was a tough straight A type of guy. My mother was an artist.  She painted. She shared her heart, which was the legacy she gave to me.
Thus when a teacher invited me to audition for a play and I won a lead role, and stepped out on stage, got lost in the moment, heard the applause, I was hooked. I had worked hard, shared my heart, and was rewarded. So I loved this thing I had found or it found me and I wove my way into doing it full time on my own. I fought for it, to do it. And through that determination, that not giving up, found ways to express and use my love for my craft of acting and telling stories. And it’s turned into beautiful creations. Like my film RATED.

How has the current global pandemic affected your writing/directing process? Do you see your path or the entertainment industry changing as a result?

I truly believe that the role of an artist, no matter what medium, is to create art that dives deep into our human condition and reflects our struggles and triumphs for all to see, so that others reflecting upon the art can take away new thoughts, insights, and heart. Now more than ever we need art.
Just before the pandemic took over our lives, I had finished the feature script for RATED and through reflecting on and living in this pandemic, I know that my writing and directing will strive to make the film as inspiring, funny and thoughtful as possible. We need inspiring. We need stories where we can see that burning light inside our troubled heroes, we can see them wrestling for it, as we all do everyday, find it and ultimately use it for the good we were all meant to do. This is my path forward, to write and direct these stories.
Stories bring us together as a community. They help us understand one another and it’s through that understanding that we might have empathy and compassion for one another. This is what we all are truly living for, I believe. I will strive to contribute to these stories.

What would you say to people who want to get into the arts? Become an actor, writer, or director?

I say, “we need you!” But you have to truly love it. Then you have to never give up. There’s two sides of the business, the art and the business. It’s hard to manage both sometimes, but you’ve got to master it, understand it, so that you don’t get beaten by it. Don’t be shy to work between jobs. Work pays your bills, keeps you in acting class, keeps you making movies.
And make movies. Anyone can learn to do any of these crafts, you just have to study it and do it. If you can’t go to college, just start studying online. There’s so many movies, classes, no matter where you are. Then make a plan and go for it. Don’t be afraid to dream, then take steps to get there. One step at a time. It might take a year, 5 years, 20, it might take a lifetime, but if you keep driving toward the thing you love doing, you’ll have lived a life you can be happy with, a life you created.

This looks great, thanks for introducing me to this film Carol!