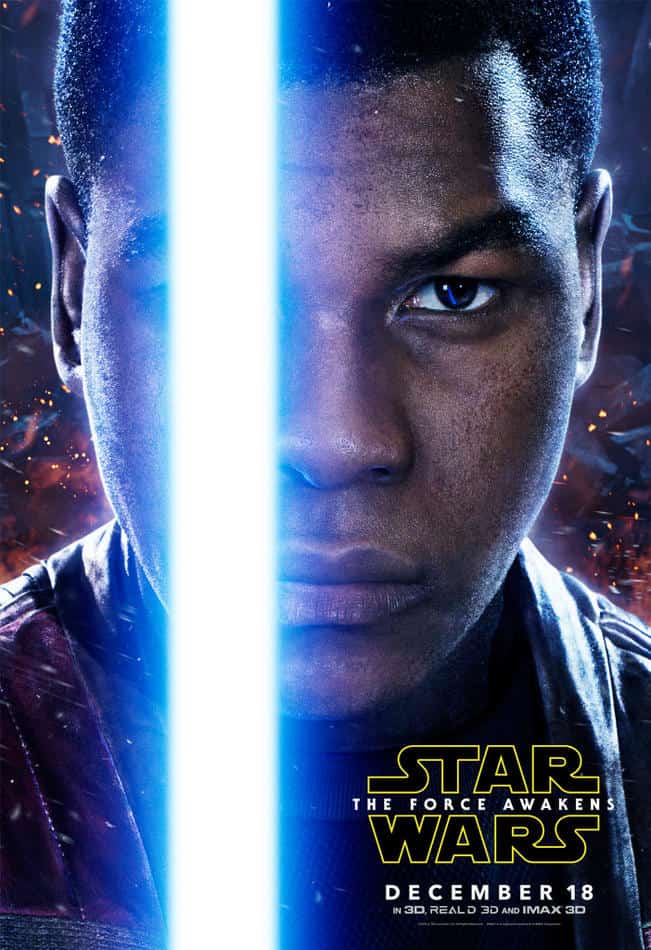 So much can be said about John Boyega’s charm and ability to light up a room. It’s downright mesmerizing – the moment he walked in he exuded excitement and was thrilled to be a part of the legacy that is Star Wars. As Finn of the latest Lucasfilmproduction of Star Wars: The Force Awakens Boyega will show the world that he’s ready for us.

Boyega’s good looks give him the appearance of a young Denzel Washington which is definitely a good trait to have. He walked in looking ever-much like Finn with a brown leather jacket. Possibly intentional but probably not. He also had a backpack which he chose to keep on through the interview.

“I’m wearing this backpack for no reason, by the way. I just felt like it, you know?  And there’s nothing significant in it”.  His thick London accent made him sound like a cool British bloke straight out of a Guy Ritchie movie. 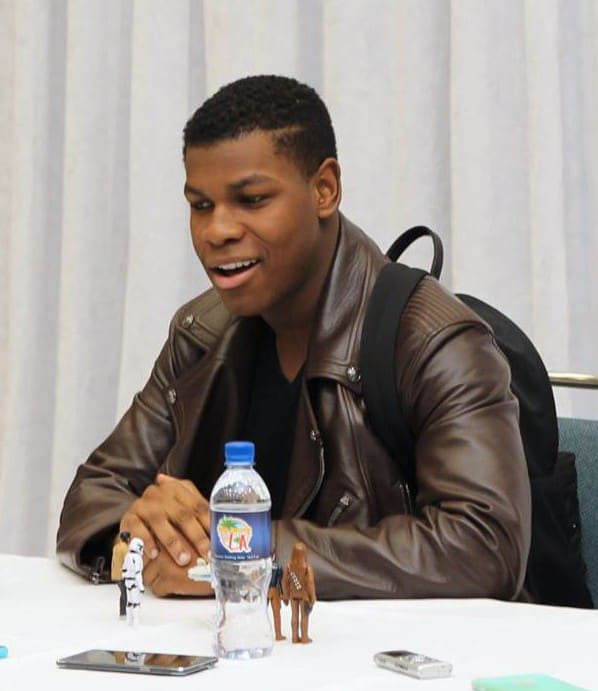 The first moment we saw Boyega was the very first teaser/trailer for Star Wars: The Force Awakens. Watch below:

‘I did like the way my glutes looked”, he joked as he talked about the first time he put the Storm Trooper costume on. “It was a good experience, because something like that kind of makes it so real that you’re involved in this universe.  When you put on the costume, it’s the final kind of step of becoming a character.  You put on the costume, and you see yourself as a character that isn’t you, and so that is something that was quite profound”. 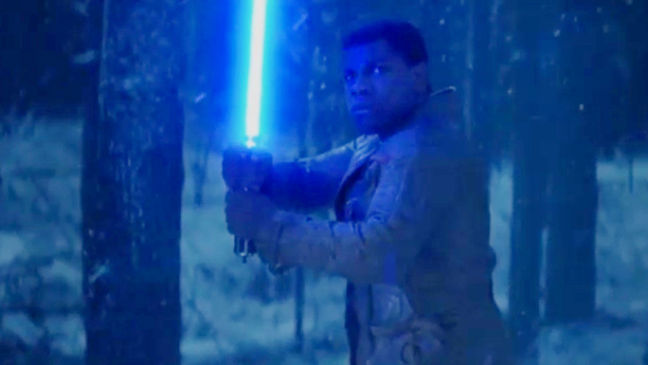 Not only is it known that Finn was a Storm Trooper at one point, but he also gets to weld a light saber in the film, as seen in other trailers and his character poster.

“Oh, that was a good day.  [in the film] There are these kids who actually make the technology for the lightsabers; they’re quite young.  And so they brought it in this black case, opened the case, I picked up the lightsaber, and I was kinda like (strikes a look of excitement) ‘It’s me with a lightsaber!’. He was just looking at me and you can see how holding the lightsaber, how that captures the imagination of onlookers. I was definitely egotistical that day”.

Although he didn’t get to keep his character’s lightsaber, he did have a mental list of what he wants from his role: “the Storm Trooper helmet, rebel jacket, and the saber, that’s what I’m gonna go back and get”. 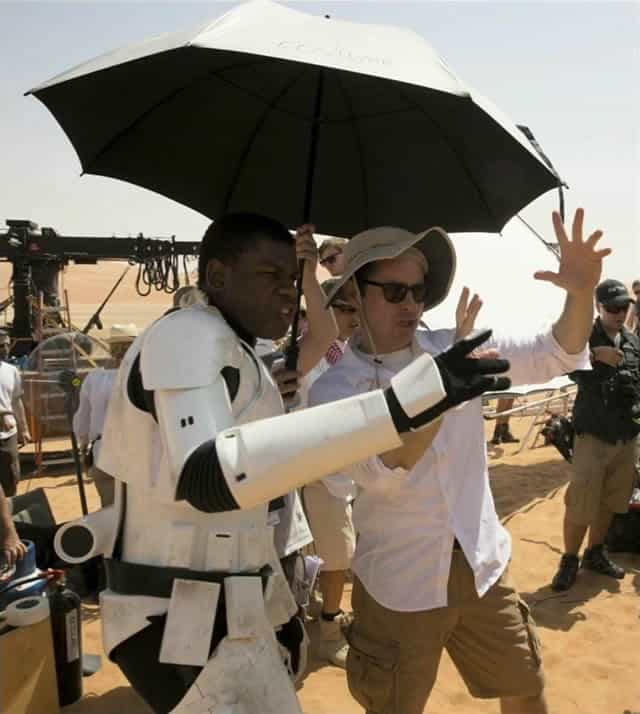 Whwn Boyega auditioned for the role of Finn it took 7 long months. He found out that he won the role from Lawrence Kasdan (writer) and J.J. Abrams while they were having dinner. “I thought he was gonna tell me I didn’t get the part because J.J.’s that nice”, Boyega smiled. I felt like if he was gonna tell me it didn’t go my way, he would’ve invited me to a dinner and just go, ‘you know what?  At least you get a free meal’.  But it worked out well and I told my agent who I’ve known since I was sixteen, and then randomly told a taxi driver. I was like, you know what, I’ve just been cast in the new Star Wars, and he said, ‘all right, mate’ (in an uninterested tone)’.

“My driver in the UK was just like, ‘you know what, mate? When you die, you’re not gonna be really dead because you’re gonna be everywhere anyway’.  And I just thought, oh yeah, that’s an interesting thought.  And so that’s it’s quite surprising to be a part of that”. 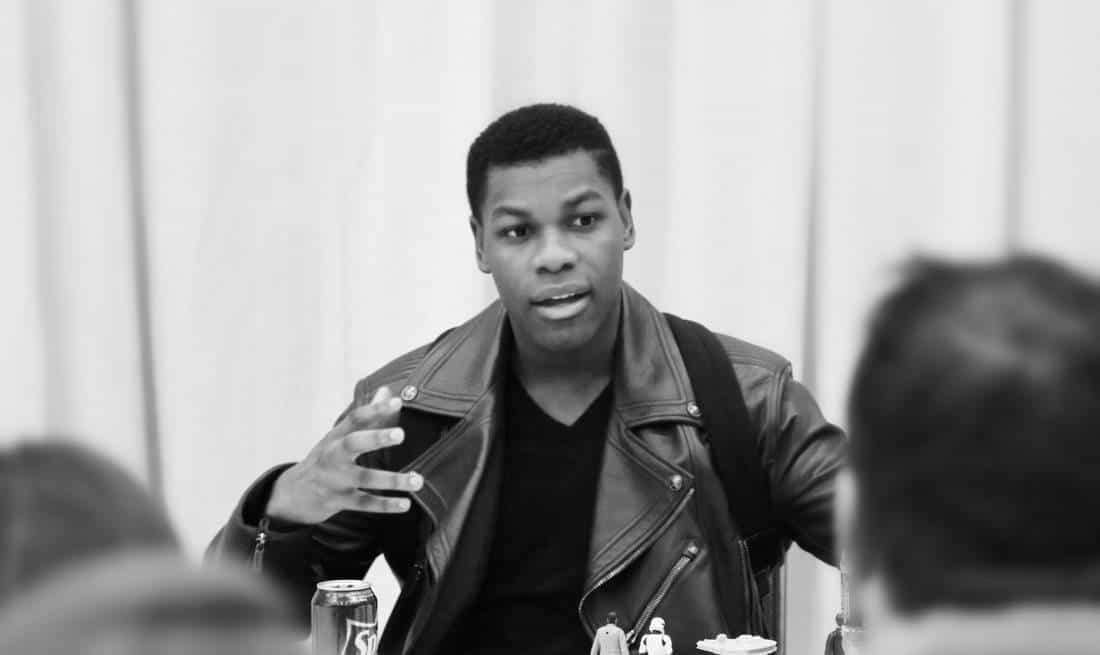 As far as training goes, Boyega jumped in feet first by training the day after he got the role in hand to hand combat.   “Specifically me and Adam (Driver, Kylo Ren) had to do the choreograph scenes together.  And Finn has a lot of shooting, running, especially with Rey (Daisy Ridley) Me and Daisy had to get our cardiovascular skills up, that was treacherous.  It was fun because now filming the scenes, you realize why the training was so intense because the, the scenes are literally practical effects- on the real locations,  there’s no time to kind of slack”.

One of Boyega’s most memorable scenes to film was the explosion scene (in the current trailer). 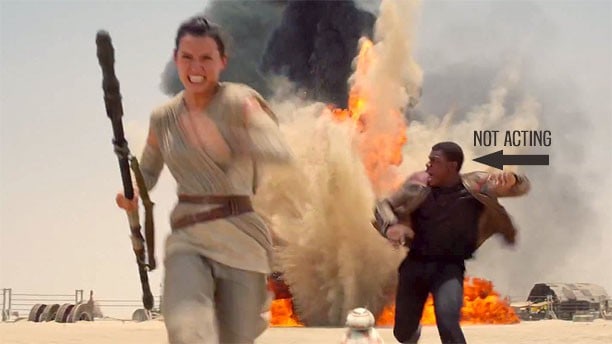 “That was me.  That was all me!” he laughed,  “I mean, with explosions like that, there are health and safety regulations and all those things. But while we were on set, I didn’t think I expected them to be that big.  I just remember J.J. coming and saying, ‘okay, uh, John, uh, we’re gonna do this scene and, uh, just run.  Do the dialog, [AUDIENCE LAUGHS], uh, yeah.  Have fun.  Great.  All right.  Cameras; action.‘  And I’m running, and I’m like, look at Daisy, and see that everyone’s backing up”.

(sidenote – John Boyega is amazing at voices and impersonations. His J.J. Abrams is dead-on)

“J.J.’s going further and further away”, he continued, “They put a plastic cloak (tarp) over the camera; people putting goggles on and hats.  I looked at Daisy like, wh- why, how come we- and they called action, and then I realized.  And if you watch the scene, I’m actually legit freaking out, ‘I’m too young to die like this!’  Uh, but it was definitely fun- those scenes.” 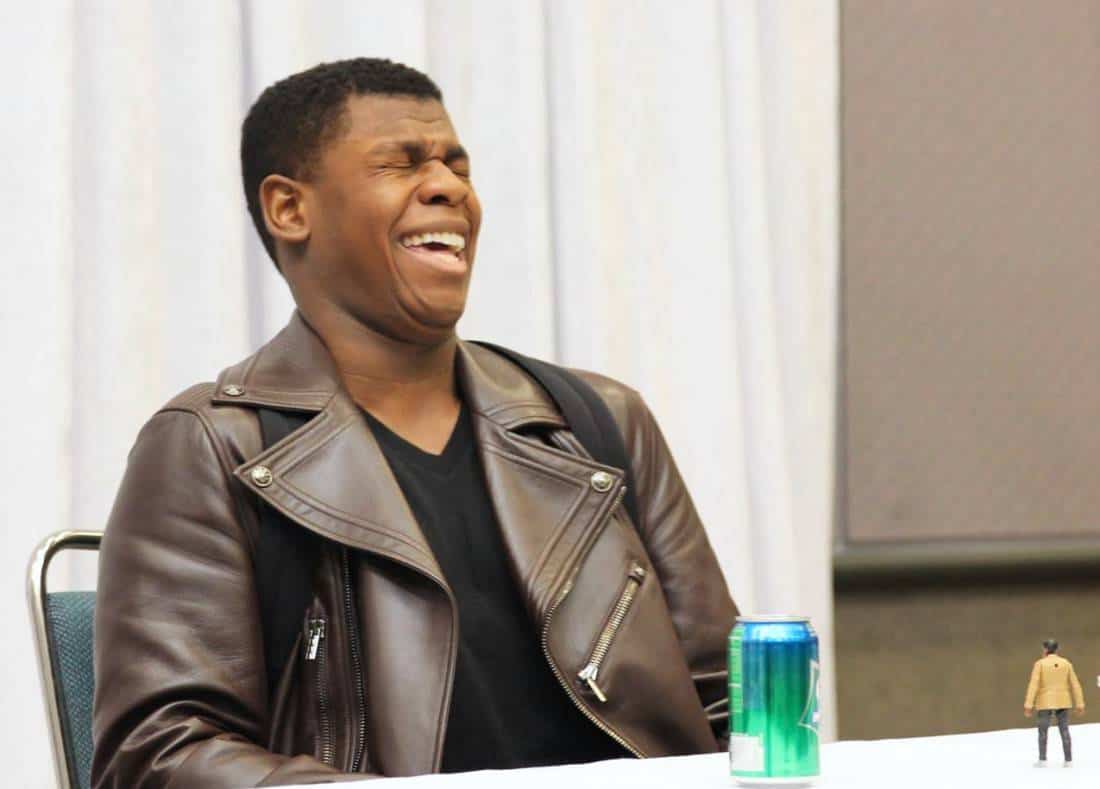 Boyega talked about his year since the first trailer came out – the first shot is him, his face, to the world.

“It’s so strange. Yesterday night I took a Uber to movie theater to see Creed.  I watched Creed – loved it. I was on the streets, shopping about with my boys on Hollywood Boulevard, and there was a car show last night, and I went to that and no one recognized me. I realize that my life is different in terms of scheduling.  I’m traveling a lot, I don’t get time to be at home as much as I want to.

“Sometimes people recognize me, but they say ‘….Naw, that ain’t him.  He ain’t holding a lightsaber-  naw, it’s not him’.”

Turns out Boyega was more of a Han Solo kid “I wasn’t really into Luke.  It’s not because he wasn’t a good character.  It’s just because I like the characters that represent human beings in these kind of projects. If any of us were in the Star Wars universe, we wouldn’t be Luke.  We wouldn’t be trying to, you know, fight against- naw, hell –  I’m trying to live. I’m trying to be Han.  I’m trying to make money; I’m trying to survive”. 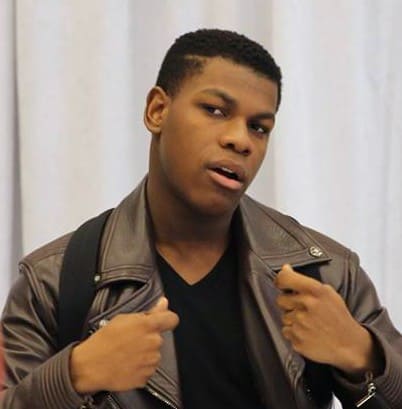 With that said, he does have an idea of what his very own light saber would look like. “My lightsaber would be rainbow colors so they’d know I was there!   A little bit and flash modes, you know, and disco mode….  I’m about peace; I’m not, I’m not trying to get into fights with no one”.

Moving back to the topic of the film, Boyega talked about his role as the Storm Trooper who quits his job.

Boyega then spoke about the journey Finn would take and specifically his friendship with Poe (Oscar Isaac).

“When Finn escapes the First Order, he crosses paths with various different characters and Poe is one of them.  They definitely have a brother relationship.  Finn finds a friend in Poe. Poe represents what Finn wants to be.  Poe is definite in his position of who he fights for; what side he’s on, and Finn is more in limbo. Finn is kinda like, okay, I don’t wanna fight with the Storm Troopers; I don’t wanna fight the resistance; I kinda wanna get away,  and Poe gives him a lot of clarity on who he is as a person”. 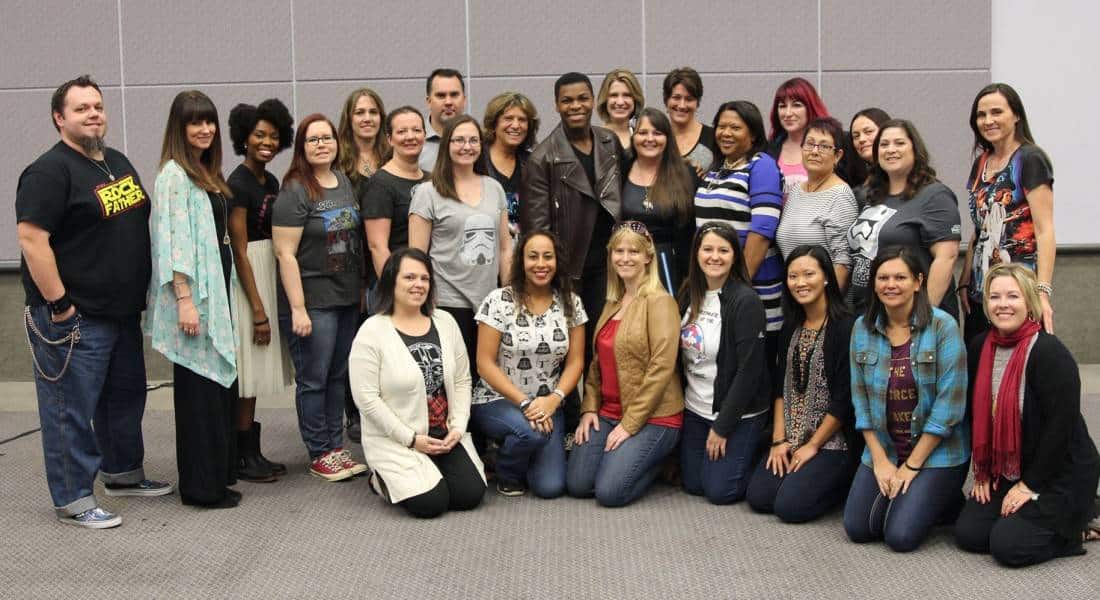 […] about what we know: There’s Rey (Daisy Ridley) who lives on Jakku. There’s Finn (John Boyega) who is/was a Storm Trooper. BB-8 is adorable and the new Star Wars mascot. Han Solo (Harrison […]