This is J.J. Abrams’ world, we just live here. He first came onto the scene as writer of the 1990 film “Taking Care Of Business” but then more notably creator (among other titles) of the mega-hit show “Lost” (honestly one of my personal favorites and I was kicking myself for not wearing my “not Penny’s boat” necklace that day). Now, he will be known as the man who made history directing the most anticipated movie of all time, Star Wars: The Force Awakens (in theaters now!!). But meeting and interviewing him? He was just Jeffrey. Humble, excited, nervous. 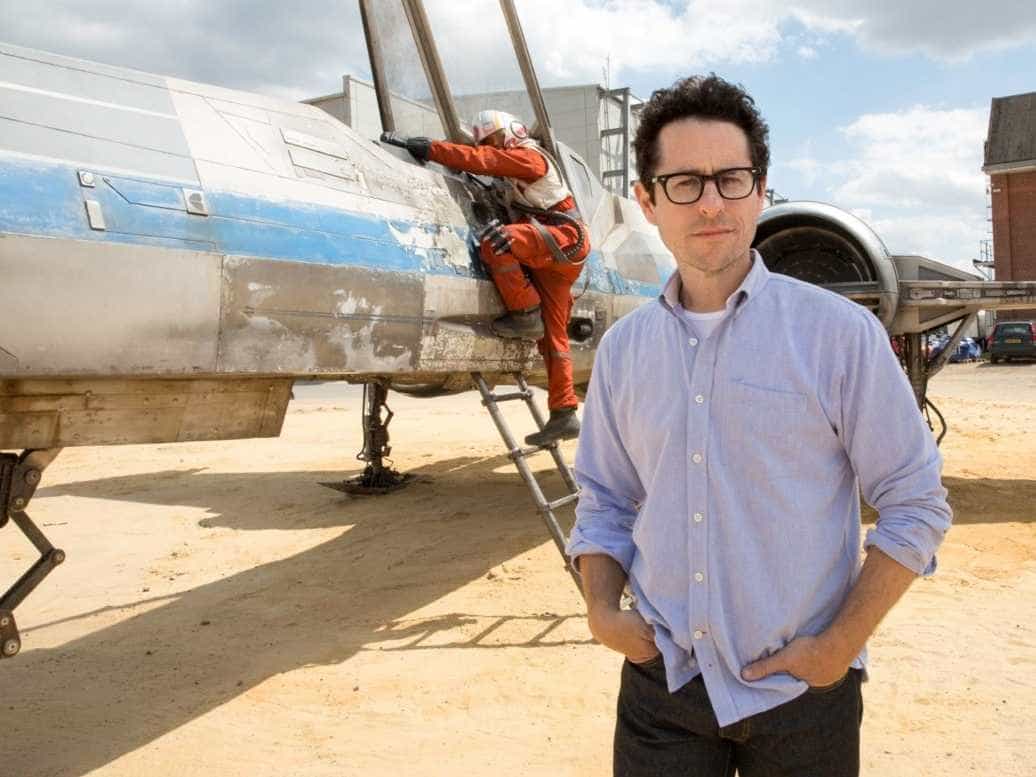 “Star Wars was something that meant so much to me for so long, because it’s been ingrained in all of our conscientiousness for so long that it’s become a birthright to just know Star Wars, you know.  You’re sort of born, you know what a light saber is, Darth Vader, you understand that.  At three years old, kids talk about Star Wars in a way that is so eerie, ’cause you think how could you possibly know so much.  And somehow they do and even those kids who haven’t played the games or seen the shows, I don’t know how it is that they understand Star Wars immediately”.

With that said, he didn’t go into writing and directing the latest Star Wars film as a “fanboy”:

He wanted to create a store that not only created new excitement and characters, but also paid respect to the original Star Wars trilogy. He was surrounded by people like Lawrence Kasdan, who’d written the original Empire Strikes Back and the Return of the Jedi, and actors who had been there from the beginning. “The whole process was really about trying to love it but also be hard on it, so that the story meant something and was emotional and not just a fan film”. 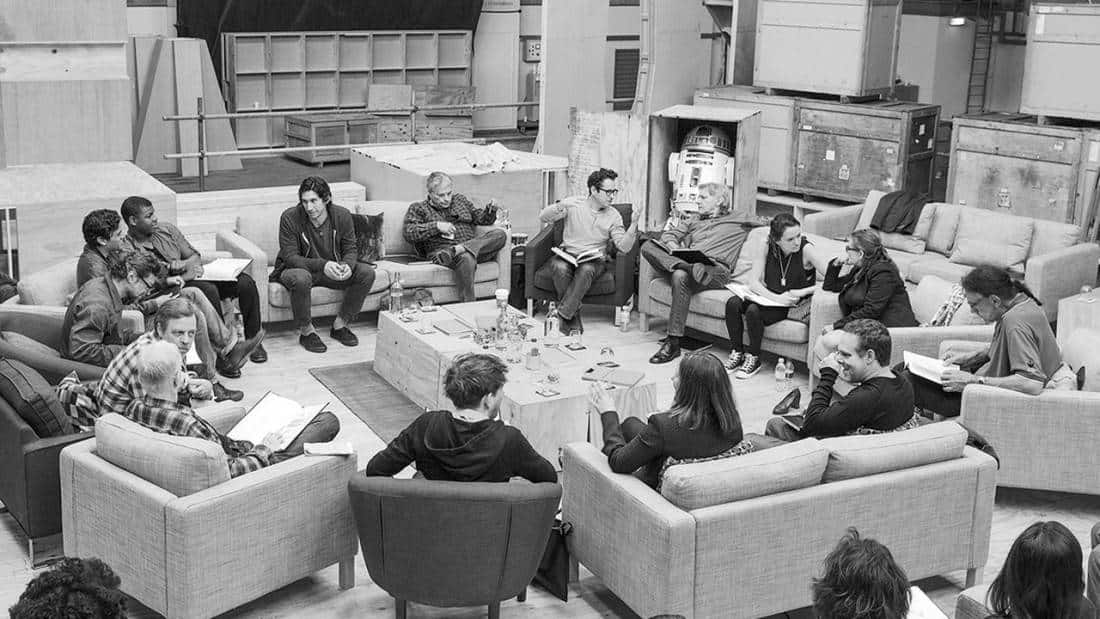 “This whole process has been going backwards to go forwards, you know.  It’s the next chapter in what happened in Episodes 4, 5, and 6.  This is 7.  It needs to feel like there’s  the continuum to that, but the important thing was recognizing what are the things that make Star Wars specifically Star Wars and not one of the many attempts to rip off what George Lucas created.  This was all about telling a new story, so  brilliant luck of having Laurence Kasdan along for the ride is, he knew having written Empire and Jedi, having lived with it for decades, about that world and where it might have gone”.

Abrams had obviously been a Star Wars fan, but when asked to be a part of it by Lucasfilm president and producer Kathleen Kennedy, it was a very surreal moment. And he didn’t accept it at first.  “My answer was no, partly because my wife and I had plans to take our kids away.  I’d been working on a lot of back-to-back projects for a while, partly because I’d worked on a number of sequels, and it felt like enough is enough and partly because I care about Star Wars so much that the idea of taking it on felt intimidating”. Ultimately she did convince him to accept the position and continue the story of Return of the Jedi.

In the decision to make it a 3D film he ended up feeling like it was needed. “I actually felt were shockingly better in 3D, because there are literally shots that I couldn’t believe I saw things in in 3D that I hadn’t seen in 2D. I was amazed at how great that looked, every stage has been as gratifying as it was challenging”. 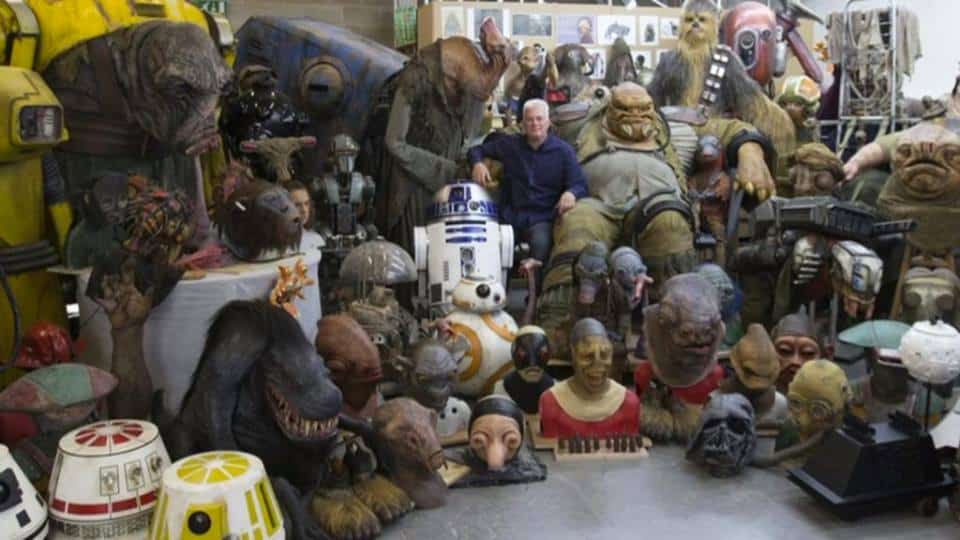 One big piece of this new film that many fans will appreciate it the use of puppetry. Most of the aliens were made at the hands of Neal Scanlan, the special effects visionary from Jim Henson Studios that came out of retirement to work on the creatures. Abrams talked about his choice to use puppets and props over CGI:

“I remember seeing Star Wars and Empire Strikes Back and Return of the Jedi, and that was before there was such a thing as a CG character.  And the use of puppetry was so brilliant and it reminded me – this is so strange – because when we were shooting the cantina scene I remember looking around and there were just puppeteers under every table and poking through things. There were just all these people there were basically invisible but they were performing these characters and that Neal and his team created.  And I remember feeling like oh, my God.  It’s like we’re on the set of a Muppet movie.  And it was so cool, I realized Frank Oz, and this Venn diagram of what Jim Henson and his workshop did, and what George Lucas did, not only to overlap in Yoda but that there was a kind of creative, home spun, do it yourself genius. 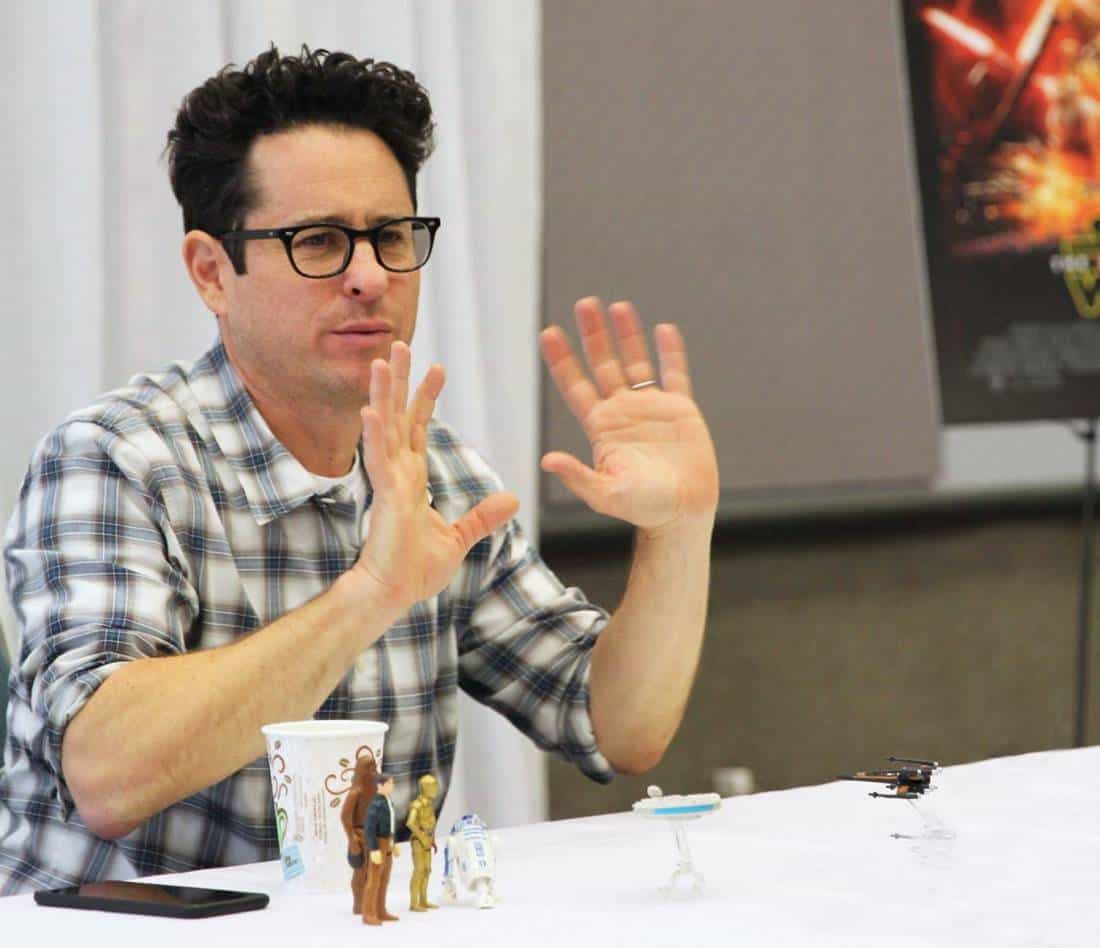 “George Lucas used the same technology to create what appeared to be living, breathing flesh and blood characters.  And it was so wonderful to have that, and as the shoot continued, the biggest advantage was in BB-8 who in scenes with the other actors, Daisy and John and Harrison this droid was alive, was expressive, was passionate, curious, helpful, afraid daring. He was literally on camera in scenes doing everything that you could have ever dreamed of.  We could have worked with our extraordinary computer graphics department at Industrial Light & Magic and made that work, but it never would have looked quite as good, quite as real. And to have Daisy (Ridley, “Rey”) her interact with BB-8.  We use CG for BB-8 not to bring BB-8 into the shot but to remove the puppeteers.  So we, we use CG quite a bit to actually get rid of legs poking out from the bottom of a creature, wires, rigs, arms and stuff like that, but it was really an amazing thing to have all those creatures and BB-8, the most important one, live and present, and in the frame and in the shot. 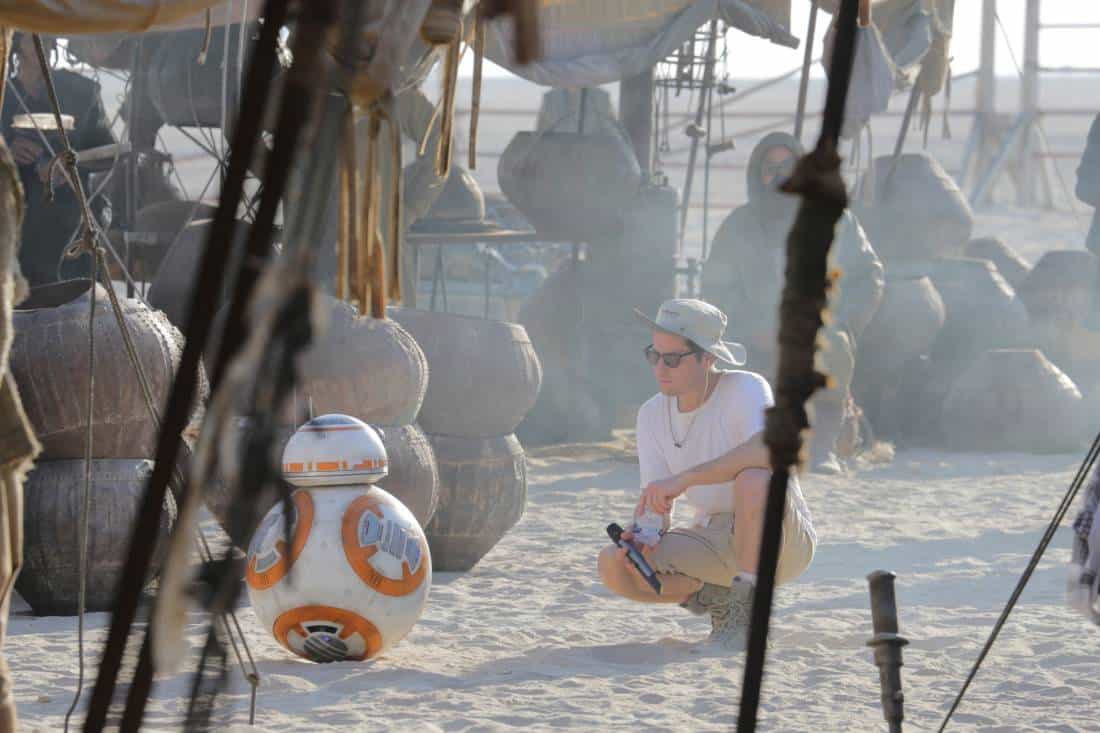 BB-8 is definitely a highlight of this new film, mainly because of the puppy-like persona. Much of that comes with his design. “I had this idea that if we had a sphere and then a semi-sphere on top, you could get quite a bit of expression without a face”, he said, referring to the emotions of sadness with the semi-sphere pointing downward, the quizzical tilting, and other “emotions” that could be shown.  BB-8 had so much personality (again a final creation by Neal Scanlan) that Daisy Ridley had mentioned how heartbreaking it was to see BB-8 not being performed. 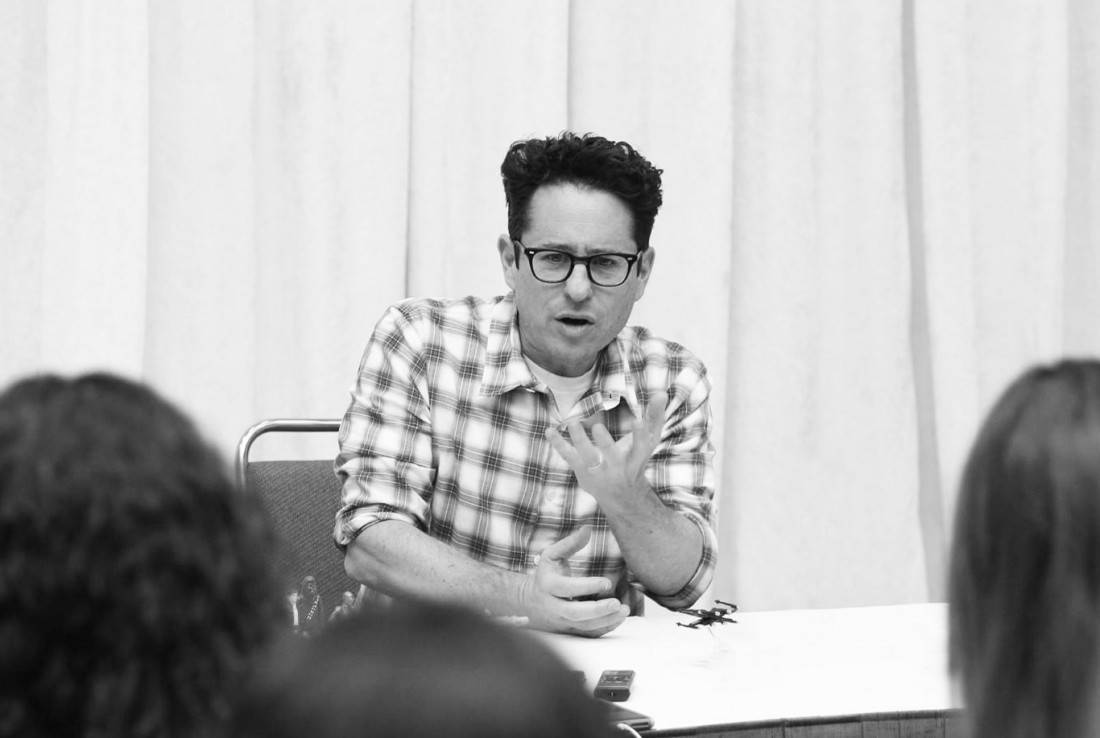 When it came to casting, it was a process that just came together perfectly.

“This character of Maz Kanata that is played just beautifully by Lupita Nyong’o was always a character and somehow always named Maz Kanata who was part of this world. Captain Phasma came about because we were trying to figure out the look of  of Kylo Ren and, and this amazing design was presented and it was like, we just were floored.  It was the coolest thing we’d ever seen. We knew it didn’t make sense for Kylo Ren, but it was really great, and so we started coming up with this character that was inspired by this, that was the head of all the stormtroopers. Gwendoline Christie’s name came up and I was already a fan. Somehow she was available and, and our British casting director, Nina Gold, also cast Game of Thrones, and so luckily there was a connection there already.  And Gwendoline came in and is as lovely as you’d ever want someone to be, and was such a Star Wars fan, and she got exactly what it needed to be instantly and was just an utter joy to work with”.

I will tell you that the experience of working on this movie really has been nothing sort of shocking to me, because it kept living up to it’s potential in a way that didn’t really feel like it would.  I kept waiting for the other shoe to drop, and it’s never too late, I guess, for that to happen, but regardless of what the reception is or, or what the result of the movie is, I know for a fact that when you see the movie, you will be seeing truly extraordinary work by thousands of people”. 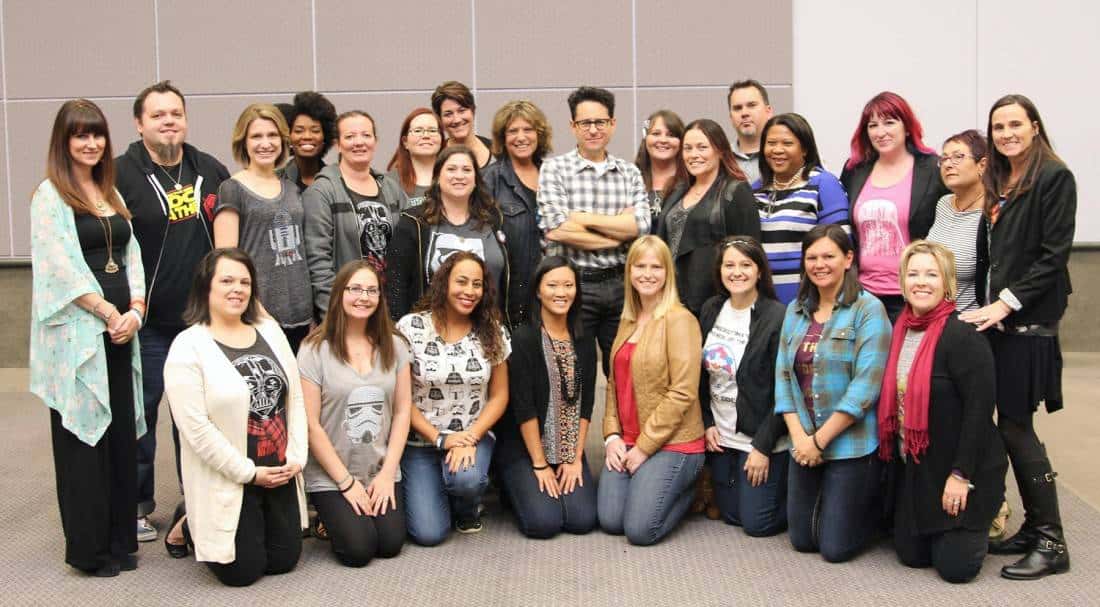