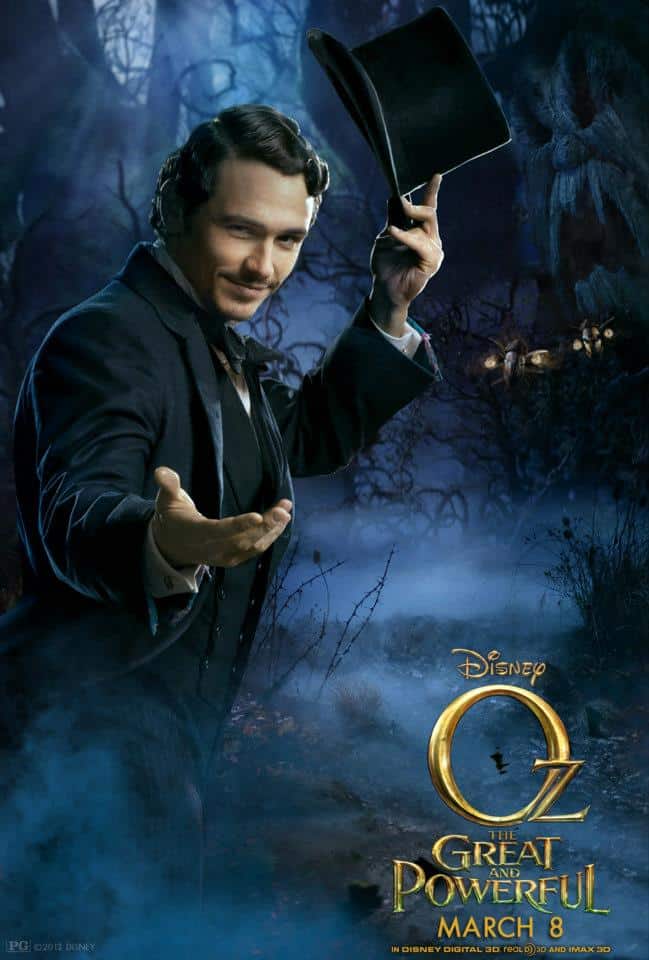 James Franco has been a heartthrob for years. His breakout role in 127 Days not only garnered an Oscar nod, it catapulted him into A-list stardom. But James does have a grounded side.

The second he walked into the interview room he put us all at ease. “I wanna see pictures of everyone’s kids and get to know each other.  We’ll get all the pictures and then we’ll be done!” he joked. Of course being a mom it took me every bit of restraint not to whip out my cell phone and show off my adorable twins. James sat down, took a couple of drink of water, we made small talk about the Oz dolls that are out (and selling like hotcakes), and we were ready to get down to the heart of Oscar Diggs…. 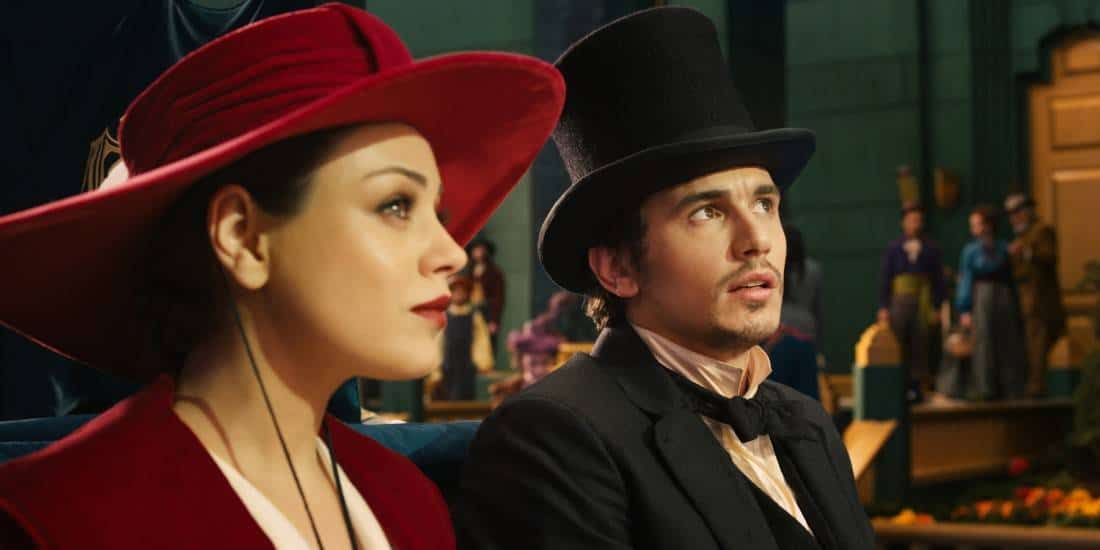 What was your most memorable moment in filming the movie?

JAMES : It was all pretty enjoyable.  It was a very long shoot.  It was six months, I was working with my old friend, Sam Raimi [director] and all the other actors and actress were great to work with, so it was mainly just long, but it, it was enjoyable all the way through, so I don’t know.  It was fine.  I mean, there’s nothing I can think back and be like, oh,  that was so hard to do, yeah.

What was your favorite part with the magic, and can you do it in real life now?

JAMES : I can.  Well, I had to train.  Uh, I trained with Lance Burton and he showed me a lot of the secret tricks, and I got pretty good at it.  There’s a scene in the beginning of the film where we see Oz, doing his act in the traveling circus – there were more tricks in the original act that I learned so I could make doves materialize out of nothing and pull rabbits out of hats.  But it didn’t make the cut.  But it was fun to learn anyways.

Were you a fan of the Wizard of Oz growing up?

JAMES : I was.  When I was a boy – the days before Harry Potter was around – I read all of the L. Frank Baum Oz books on my own.  They were some of the first books I read for pleasure outside of school.  And it was fourteen or fifteen that he wrote, and I just sped through them.  I, I remember there was a local book store called The Printer’s Ink in Palo Alto –  it’s gone now, unfortunately.  It was an independent book store and they had all the Oz books there, and I remember just like getting excited seeing all of them and going through each one.  So that was my Harry Potter, I guess. 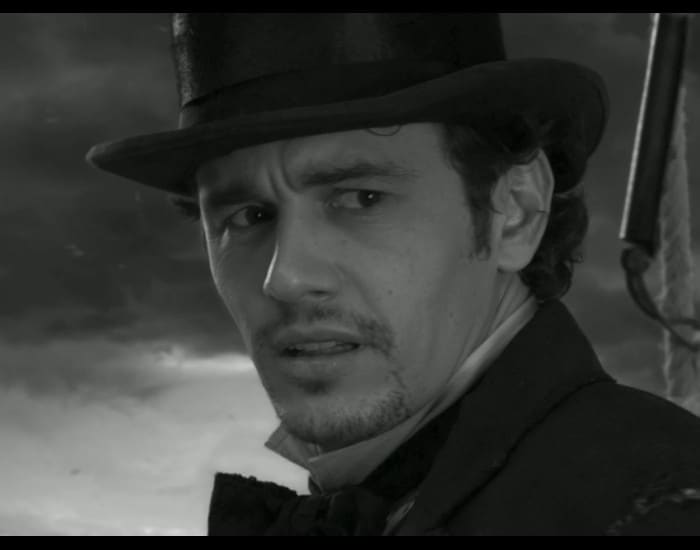 How was this role different for you compared to Spiderman?

JAMES : Well, in the Spiderman films, I play Harry Osborne who is a supporting character.  And the thing I’ve learned about Sam Raimi is that he identifies with the characters in a lot of his films.  And so when we did the Spiderman films, he identified it with Peter Parker.  And even though he and I got along very, very well, and became very good friends, I felt like I was not getting the full sunshine of his love because I was playing the character that was trying to kill his alter ego. And, so now in this film, I’m the lead. I think Oz is a stand-in for certain sides of Sam, you know.   Sam has a nerdy side and a childlike side, but he also, he can be a little bit of a trickster.  And in addition to that Oz in an entertainer.  He creates illusions to entertain people, and that’s exactly what Sam does. And, so I’m finally the character, playing the character that he identifies with, and so I get all of his, his love.  So it’s great.

Who’s your favorite witch to work with?

Did Sam give you license to add personality yourself?

JAMES : Sam is a very collaborative director.   And so everyone is welcome to bring things to the table.  And so with the character Oz, not only did we rehearse in advance two weeks of the film, we rehearsed throughout the film. I actually didn’t ever have a lunch to myself – I was spending all my lunches going over the script and the scene with Sam and the other actors, and through that process, I think the character of Oz, changed quite a bit. I was surprised at how different that early draft was to where we ended up and that’s just because of the way Sam works, and the way the project develops through the whole process.  I’m sure some of me made it into the character that wasn’t originally on the page.

How was it working with Finley and China Girl?

JAMES : So, Zach Braff plays the flying monkey, Finley, and Joey King plays the China Girl, the doll made out of porcelain.  And, those were some of my favorite scenes. I thought they were just great characters and great kind of oddball sidekicks to have in the land of Oz.  And then I loved Joey and Zach.  I would do anything with them.

They’re great collaborators.  But the actual process of interacting with CG characters is it’s own kind of thing, but filmmakers and actors are getting more and more use to it.  So it’s not as if I’m just acting to nothing the whole time.  There’s a process you go through, and I think I got great training on a movie I did called Planet of the Apes where I got to work with Andy Serkis, who played Gollum, and then played Caesar in my film, and he’s kind of the master of this performance capture kind of filmmaking. And so you go through a series of different kinds of takes.  In the early takes, Zach would be there with me so I could interact with him, and then for the China Girl, there was a great puppeteer who could bring this puppet to life, and then I would hear Joey’s voice in my ear.  And  he’d make the doll react to her, to what she was saying. 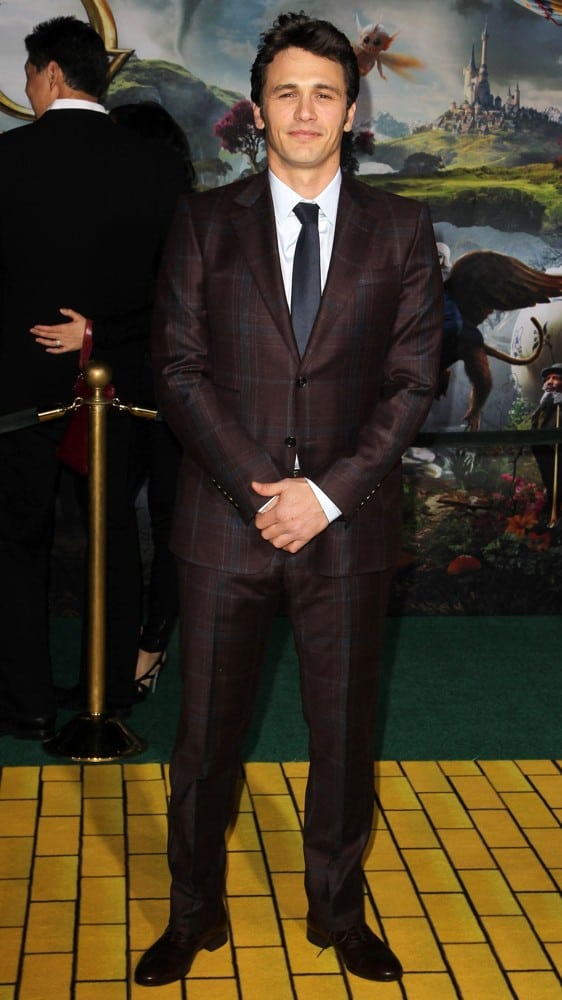 So you do those in the early takes and if the computer animators want to, they can always use my side of those takes and then paint out Zach or paint out the puppet.  But then, at the end of that series of takes, once the scene is sort of ingrained in me or I know the flow interaction,  they’ll always take them out.  So I will eventually have a take where I’m acting to nothing and if you were a guest that day and saw that, you’d think I’m an insane person or something.

Do you ever sleep?  How do you manage all that you do?

JAMES : I do sleep!  I do a lot of things but I’m in the fortunate position that my job is what I love and, um, so I don’t need a relief from it.  So I just kind of move from project to project because it’s how I enjoy life, you know. So it seems like I’m doing a lot of things but it’s really just because I fill all of my time with these things rather than half of my time, you know.

We were beyond thrilled that the busy James Franco took time out to meet with us moms. He’s an amazing talent, and it’s an honor to see someone love his craft so much that it envelopes every aspect of his life. And he’s just fine with that. 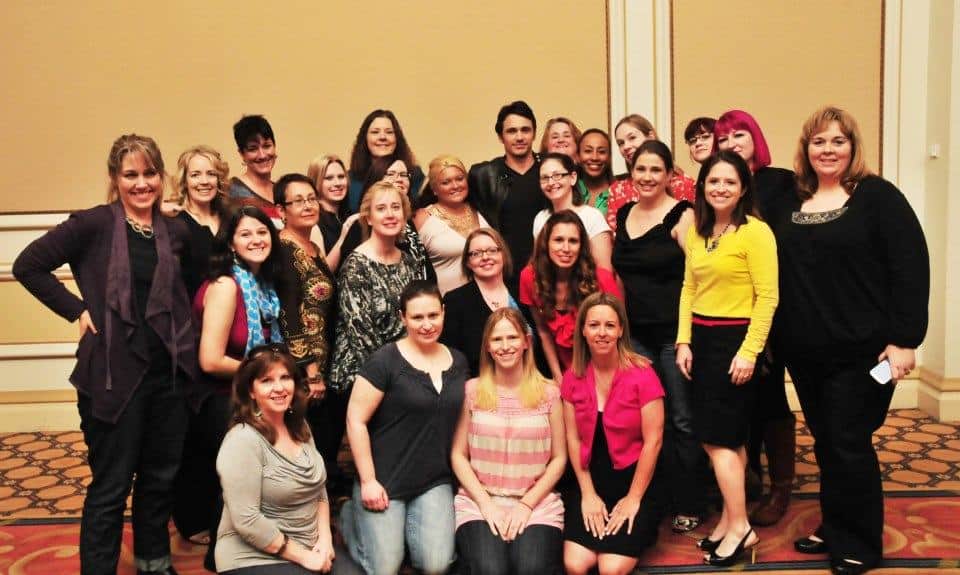