You know what there’s not enough of? There’s not enough DANCING! Although I have two left feet, I love watching dance – whether it’s classical, lyrical, street, or ballet, I find great beauty in the art of dance. Teen Beach 2 (premiering 8pm June 23rd on Disney Channel) is working hard on bringing dance back into our homes with some super moves that are not only easy enough for a 41 year old mom like me to do but also super fun! 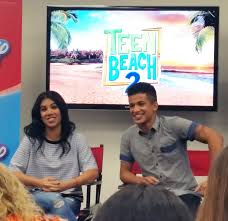 I got the pleasure of chatting with Jordan Fisher and Chrissie Fit and learning some dance moves from their new Disney Channel movie Teen Beach 2, the highly anticipated sequel to the hit Teen Beach Movie. Luckily they took it easy on us and taught us a marching sequence from the song “Gotta Be Me”. Check out the segment (from the movie, not ME dancing!!):

How FUN is that? We did the MARCH. TO THE BEAT. part. It was energetic, fun, and a little (ok, a lot) silly. If you want to learn it I got the steps thanks to DisneyGals:

So you can try it yourself or teach the kids 🙂

The dance moves in Teen Beach 2 are fabulous – lots of meshing that 1960’s vibe with a modern twist. Energetic, exciting, and very easy to get sucked into. You’ll be humming the tunes in no time (I dare you to try not to!).

Here’s a full list of songs you can look forward to in Teen Beach 2:

Every song has a HOT dance number to go with it!