Alice Through the Looking Glass is in theaters everywhere!

I have interviewed several people in the entertainment industry, but Suzanne Todd was different.

She walked in looking elegant yet completely approachable, wearing a gorgeous navy caped dress that made me decide I needed a caped something. She was all smiles as she came in toting a box that looked like a storybook with images of the original Alice on them from the 1951 classic. In this box were the shoes that many were ooh-ing and ahh-ing over at a recent conference she appeared at (Disney Social Media Moms).

“I’ll tell you why I’m not wearing them tonight. I posted last week something about a really good friend, Maria Shriver turns 60 this year, she said “please just help me with my charity thing that’s coming up instead of buying me a birthday present“.  So I said I would help her with her fundraiser, which was this past weekend that was called Move for Minds. It was raising money for Alzheimer’s.  She lost a parent to Alzheimer’s. I had posted – but I’ve never done this before – for people to support the fundraiser. I just though oh, maybe someone will.

“And there was one person that actually donated like who I’ve never met, which I thought was so amazing, and she wrote that it was like in honor of her grandma, which was so touching, but I think she’s here”.

Keri Lyn on SheSaved.com blushed a bit and said “That’s me!”.

Suzanne smiled and said “I’m giving you my special shoes. Thank you.  I was really, really touched that you donated in honor of your grandma”.

it was this moment the entire room of 25 bloggers had their hearts in a puddle on the floor. It was so touching and moving, and a real testament to how us “mom bloggers” are viewed by those we are promoting – appreciated.

With that, Suzanne sat down and we talked about Alice Through the Looking Glass…

On the Subject of Time

I have three kids.   You guys here are all working triple duty as all moms do, and I just feel like the older I get the more precious I find my time is to me.  So that for us was really important.  The idea of being able to put a movie out there that is a kind of we girls can do anything movie for my little girl who is 11 now, and also just recognizing time is so precious to all of us.  And when I look at technology and the lovely positive power of the internet there’s a thing about technology is that it was supposed to be created to give all of us more leisure time.

But really what is does in some ways is it’s turned all of us into 24 hour workers, there’s no time of the day when you can’t be doing something productive that has to do with your technology.  So it’s a balance that we all have to try and find for when we’re gonna turn it off of put it away and really sit down on the blanket and have a picnic with our kids, because it doesn’t happen enough, but then when it does, I think everybody has that moment where they think oh, this is what I should be doing on a Sunday afternoon.


On Alice in Wonderland vs Alice Through The Looking Glass

The response to the first film was so kind of unexpected and overwhelming. Getting the cast together was much harder on the second one because they’ve all continued to have flourishing, amazing careers Anne Hathaway has won an Oscar since then and how they’ve done so many amazing things and Johnny (Depp) is always booked.  He’s always working.  Normally when you’re casting a movie, you go through the script and you make lists of the characters, and then there’s about 20 actors on a list, and you go one my one and you offer it to them.

You go to Brad Pitt and say Brad Pitt, do you want to do it?  And he says no, and so then you go to George Clooney and say do you want to do it?  And you kind of work your way through the process.  On the first Alice, Tim literally just picked the people he wanted, and called them.  And every single person said yes.  So the second time, obviously, we knew who most of the actors were going to be, but scheduling was very difficult.  It probably took us almost another year to really get started, to get all the actors when they could work at the same time.  We have Johnny for these days here and we have Anne’s days here.  We have Sacha for these days, when he’s finishing the other movie.  And it’s all like a very complicated jigsaw puzzle.

On Women and Hollywood

It’s just part of working in Hollywood.  You look at these dismal numbers of, you know, female directors and female producers.  And, you know, I’ve been doing it literally 30 years now, and it hasn’t really changed very much. I wish that it had changed more.  I mean, it’s certainly taken smalls steps forward, but it’s not like it’s hugely different.  It is, it is very difficult. I’d like to lie and say oh, no, that’s not true at all, but that’s true, you know.  It’s harder as a woman.

I always had a mentee every year from USC, a girl, and then I always have a mentee every year from the producer’s guild, which is another group that I’m affiliated with.  And then I was on the board of a girl’s school here called the Archer School for girls for six years.  And so I work with those girls also.  They just actually had a film festival, and I got to go and speak on a panel for them.  And I love spending time around young people, because they have so much more energy than I do.  You get so much inspiration from them.

On Being a Working Mother

I’m learning every day just like the rest of you.  I think however many years it is down the road for me now – I know it sounds like an Instagram saying – but I definitely sweat the small stuff less now.  And maybe that’s just because I don’t have time for it, or the energy for it, but, you know, things that bring drama and conflict and aren’t productive moving forward things, I really stay away from or avoid or I will cross the street to get away from.

And that’s very different for me, I think, than I was probably 10 years ago or 15 years ago, you know.  I’m very, very focused on what I think will be a positive outcome, and it’s something I actually talk about a lot with my kids, and stuff that comes up for them, because I always think the best advice I can ever give myself is the advice I tell my kids, because I’m much better at telling my kids what to do usually than I am at telling myself.  So if I pause and think about what I would tell them, then I usually do a better job.

On Working with Sacha Baron Cohen


Sacha talked about how when he’s developing his character, that the costume is really, really important for him.  And when we got into it  with Colleen Atwood (costumer designer), Sacha played so many interesting characters before that there was certain things he wanted to stay away from.  Like he didn’t want to do anything he had done before, so then it was kind of this process of elimination, but the one thing he really, really wanted to do was wear tights. I thought was so funny, and I didn’t totally understand it, but I went to the first costume fitting and I saw him in the tights, because his legs are ridiculous.  He has like two spider legs where literally his thigh is the same size as his ankle – which if you look closely in the movie, you’ll see – but I love that Sacha understood the ridiculousness, the skinniness of his legs, and that’s why he wanted those little pantaloons with the tights. 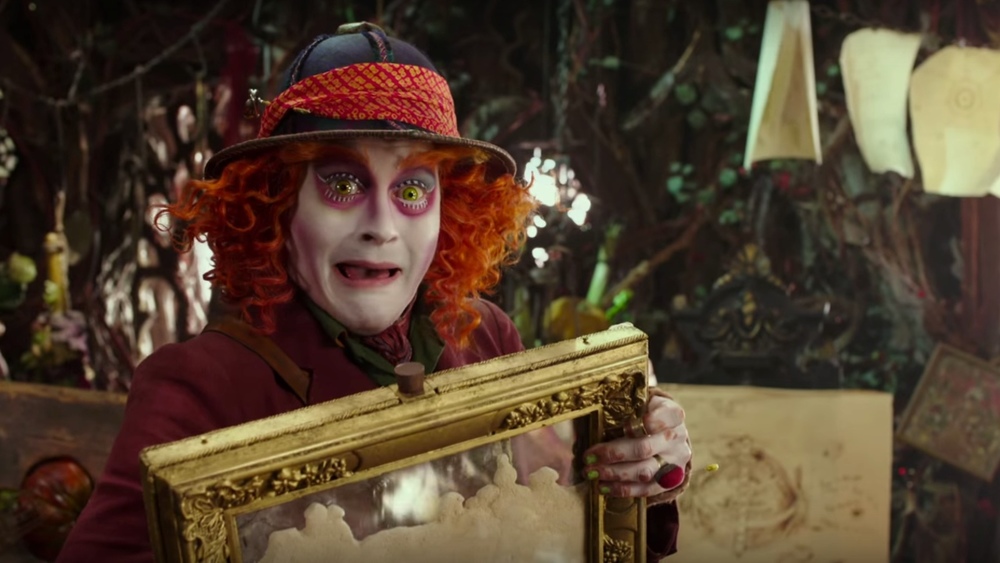 On Working with Johnny Depp Again

With Johnny, obviously we weren’t like inventing a new character, but it was so, so amazing.  It wasn’t something I was thinking about the first day that Johnny was working and he came and gone through the makeup and the wig and the contacts and everything.  And we were doing a scene and I just remember the first time he opened his mouth and spoke, I got tears in my eyes, because it was like seeing the Hatter again.

It had been so many years in between, and Johnny is so gifted and just bringing vulnerability to the Hatter, even behind all of the craziness.  It’s, like he’s such a talented actor and it was just so sweet.  I was like seeing an old friend that I hadn’t seen for so long.

On What’s Next For Suzanne

We could have done better or, that girl packed a better lunch or her kids speak Mandarin, all those things. So in our script there’s Christina Applegate, who’s the mean one in school who tortures Mila Kunis, but when I talk about the movie or even with those six actresses, every single person had a Gwendolyn in her life, whether it was at her schools or her sister-in-law or her mother-in-law.  There’s somebody that’s like putting energy everyday into making you feel bad.  And that idea that hopefully you’ll come out of the movie and feel like I don’t really need to feel bad. Because what she says doesn’t really mean anything to me, you know, any more than like they guy standing next to me at Starbucks.  You know, I can just feel good about what I’m trying to do and enjoy my life with my kids rather than just trying to be this unobtainable, perfect mom.  I guess maybe relatability is the theme or what attracts me to those projects that are very dissimilar.


Alice Through the Looking Glass is in theaters everywhere!