(but I’m pretty sure you already know that)

I gotta say that interviewing Harrison Ford is probably one of the great highlights of my career so far.

I grew up on Star Wars and Indiana Jones. I had a massive crush on Han Solo (as much as a 6 year old could have). The crooked smile, suave moves, and snarky tone was perfection to little me. A regular thought was “someday I will grow up and marry Han Solo”… 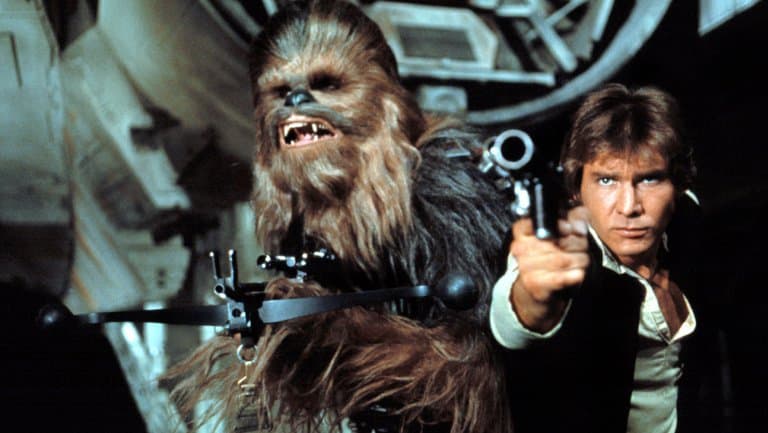 Of course, I grew up and realized that Han Solo was a character, but Harrison Ford was still a favorite of mine. So when it was announced that not only was Disney sending me to Los Angeles for Star Wars Episode VII: The Force Awakens but I would ALSO be interviewing the one and only Harrison Ford – one squeals (as one does). 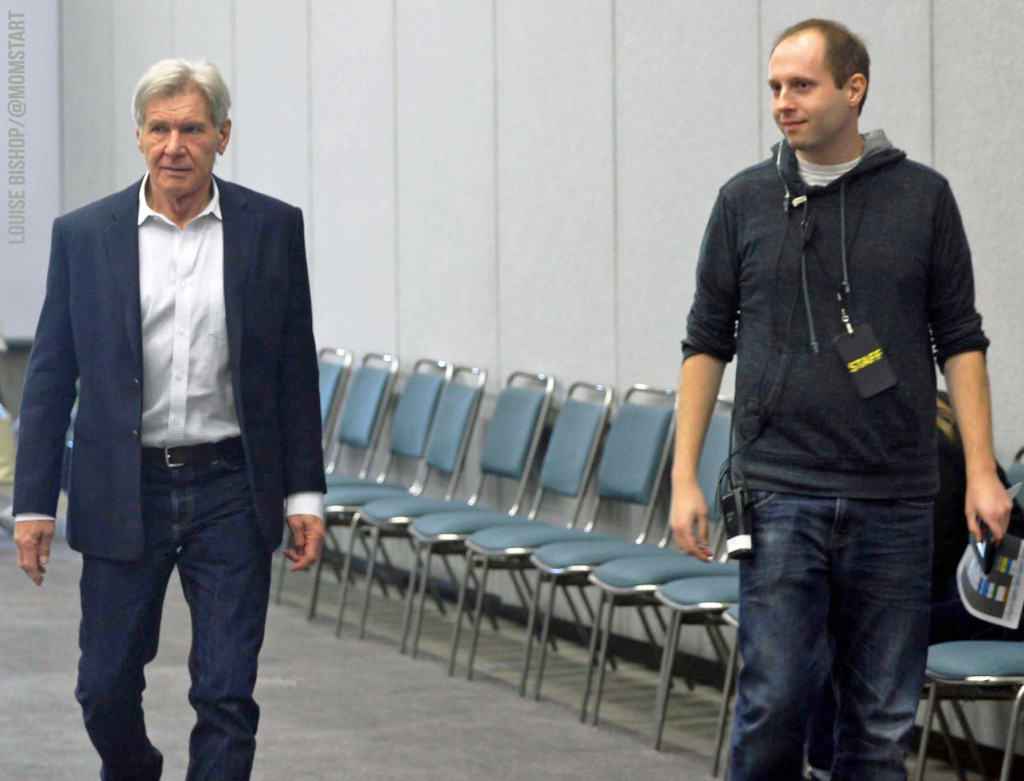 I hardly think Harrison Ford needs much introduction. Unless you have been living under a rock then you know his more notable roles in the Star Wars franchise along with Indiana Jones. Let’s face it, if you are reading this you are obviously a fan. Or a stalker.

One thing I learned about Harrison Ford was that he is incredibly humble and gracious. He takes his job as an actor casually, but that’s because he’s so damn good at it. The Oscar nominated and Golden Globe winning actor takes the character Han Solo in stride. 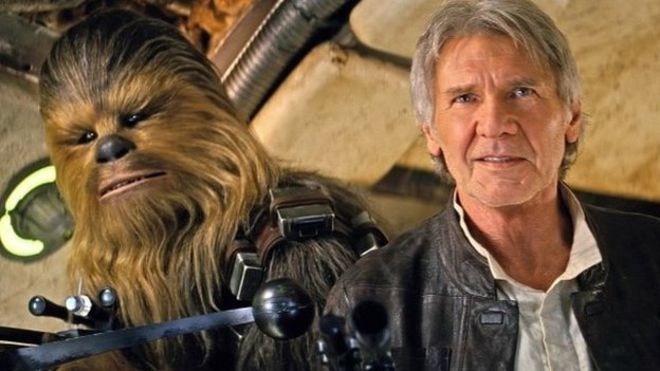 Harrison said that getting back into the role of Han Solo for The Force Awakens was easy.  “It was familiar.  Same thing only different”, he said as he eyed the room thoughtfully.  “I was there in service of a script that I thought was very good.  A sort of road map for the character that I thought was worth coming back to with a director whose work I admired and who I knew from a previous  film twenty five years ago (JJ Abrams wrote and produced the drama Regarding Henry). It was an all together attractive prospect.  If we were trying to pretend, if I dyed my hair and pretended that 30 years had not gone by, I would be much less comfortable.  But this acknowledges the reality of the passage of time”.

Harrison went on to talk about the legacy of Star Wars that George Lucas created and ultimately passed to producer and president of Lucasfilm, Kathleen Kennedy.

“If it were not for the fact that these films have been passed by parents to their children at an appropriate juncture in their lives and  that generations have thus been introduced to me, I probably would have a much different career. So I’m very grateful for the fact that these were family films that been passed on as though there were some nugget of useful information or at least entertainment in them and recognizing their value to the audience  gives them significance to me”..

“The imagination that’s involved in these films  the strength and worthiness of the Mythology that underpins them, the questions that it generates in our minds about our own responsibilities, our own behaviors, um, all of that plus whiz and bang and flash and music and good stuff. There is a kind of fairy tale structure in the characters and in the story, when you have a beautiful princess and a callow youth and a wise old warrior and then me, it was easy to figure out my place in that structure”. 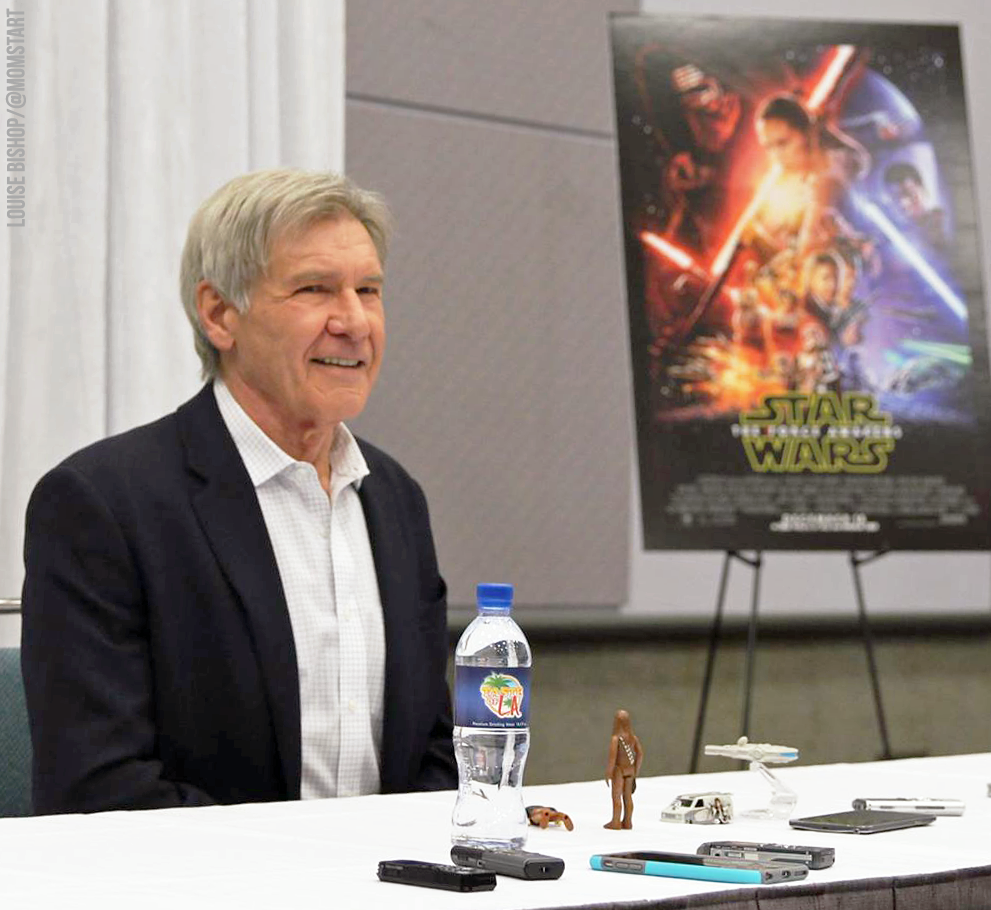 While he doesn’t have a particular favorite moment, Harrison thinks that the entire experience of Star Wars has been a positive one, specifically the direct family thread.

“I mean, it’s great to be back with Mark [Hamill] and Carrie [Fisher]. I spent a little time with them and Peter Mayhew (who plays Chewbacca) and a lot of the crew. Some of the older members of the crew have worked on the earlier films.  But more often there were sons and daughters of the people who worked on the original film now are still in the same craft business and were back to work with us”.

He also mentioned that he enjoyed being back in England to film, as he hadn’t filmed there since the last Indiana Jones movie. He joked that the “food has gotten a lot better”.

One thing to mention is that James (The Rockfather) was also in attendance and, as James does, brings toys in the actors likeness and character. While Harrison doesn’t have a particular favorite, he was picking up and playing with the vintage Han Solo action figure that was placed on the table prior to his entrance. At one point he placed it in his jacket pocket as he casually said “I just don’t get caught up in toys”… 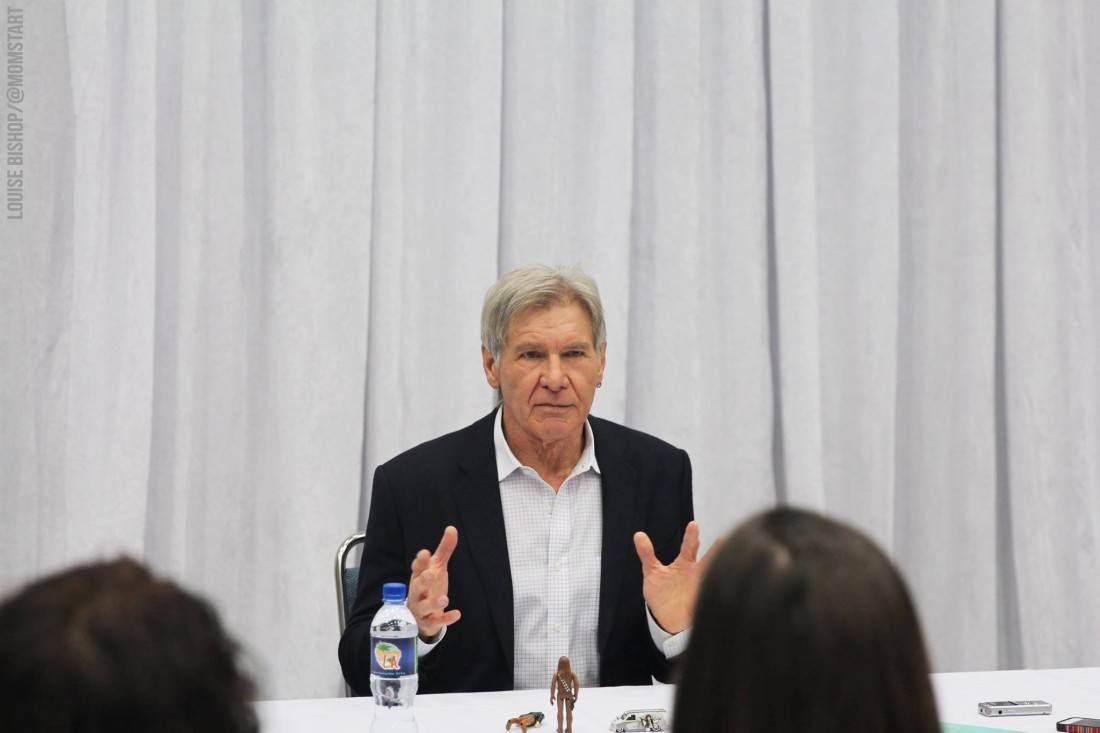 A big part of Star Wars is the collaborative effort, not “one person’s unilateral decision”, he stressed when asked about his script contribution. “It’s a matter of agreement.  If it’s in the Movie, J.J. agreed with it when we shot it.  A lot of the process of film making is problem solving, is saying ‘this is not working, is it? How are we gonna fix this?’  And I love that part about it.  There’s a kind of urgency  to try to keep the ball rolling, doing the right thing, because time is limited that there are a lot of people standing around waiting for you to get it right.  All of those things, that’s a compelling atmosphere in which to work.  I love that.  But I don’t feel a sense of ownership or pride about these things. I can’t remember what’s mine or what good idea came from a crew member”.

As we were getting to the end of the interview time slot, Harrison had warmed up to us ‘mom bloggers’ and didn’t want to stop answering questions so that he could give everyone a fair chance.

“I’ll make much shorter answers.  Yes, from now on”, he said as he scanned the room. 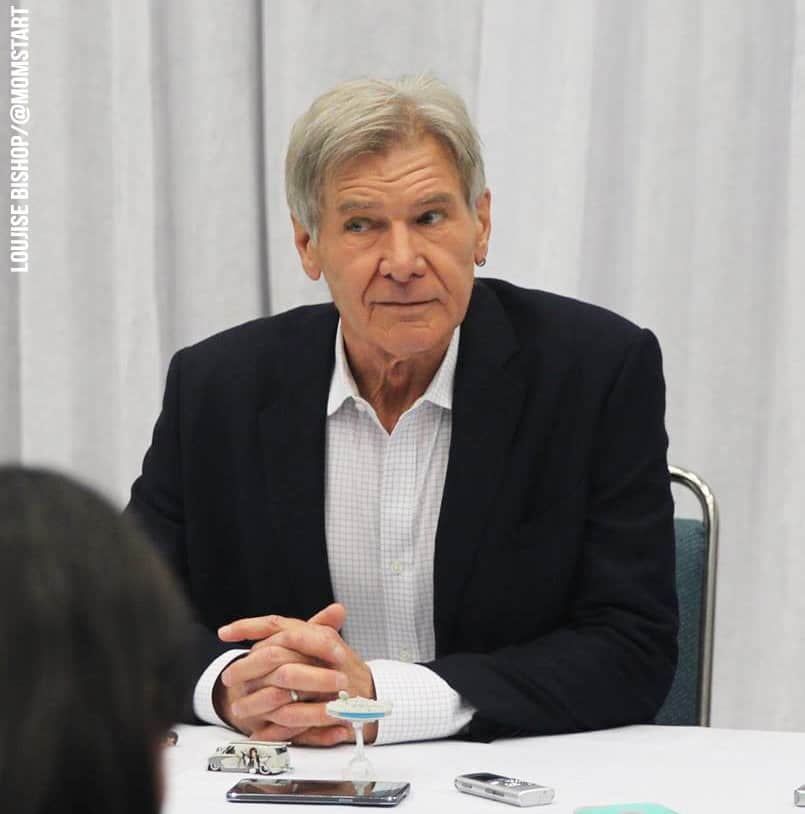 What take away do you have or what do you want the new Generation to take away from Star Wars?

What was the most challenging part of the process for this movie?

You don’t collect toys but do you have any props that you’ve kept over the years that are yours?

“I bought my horse and Daniel Craig’s horse from Cowboys and Aliens. I still have mine…”

With that he gave the famous crooked smile (yes he still has it) and we took a group picture. I was lucky enough to be standing right next to him by pure luck – I stood up and walked over to the photo area, he walked up and stood next to me and I decided that he made his choice. Must be the hair. 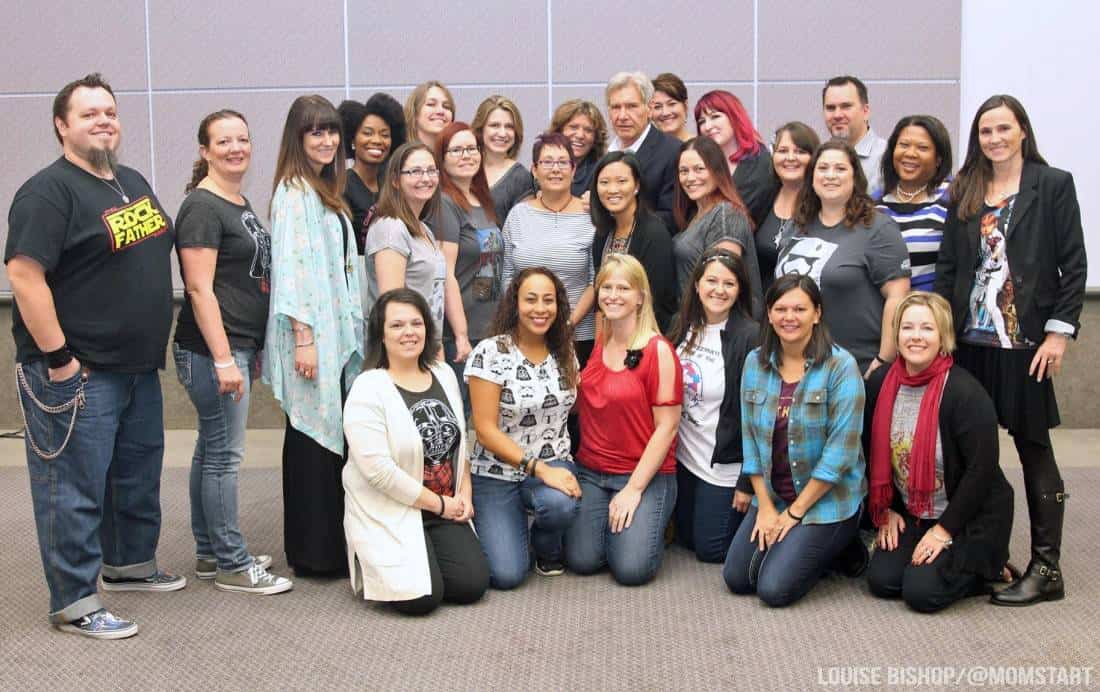 *All photos copyright Louise Bishop/@MomStart and used with permission.