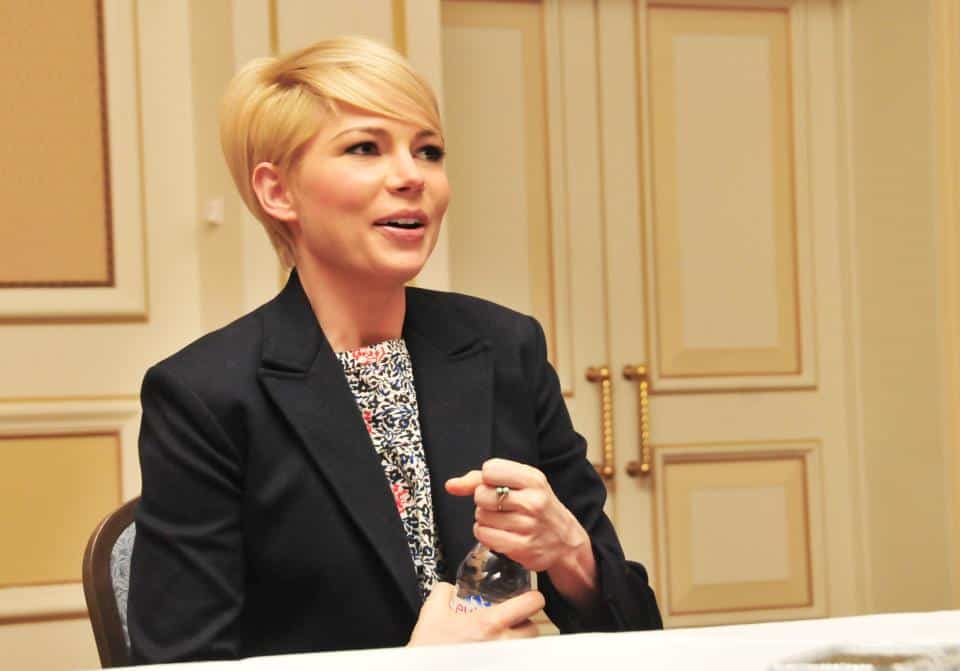 I (along with 24 other bloggers) had the honor of interviewing award-winning and Oscar nominated actress Michelle Williams about her role as Glinda in Oz: The Great and Powerful (opens nationwide March 8, 2013)

Michelle Williams walked into the interview room at the Langham Huntington Hotel in Pasadena we were seated in looking lovely in a black and white print dress, black blazer, and black suede platform heels which heightened her 5’4″ frame. Her signature cropped blonde hair was expertly styled in a side-swept look, appearing effortless.

“Mommy bloggers!!” she squealed as she walked in. “A whole room of mom bloggers? Did you guys set this up just for me? That’s so exciting!”. Her animated and embracing approach put us all at ease and we got right into asking questions. Michelle sat down at her table among the myriad of voice recorders and eagerly awaited her first question. 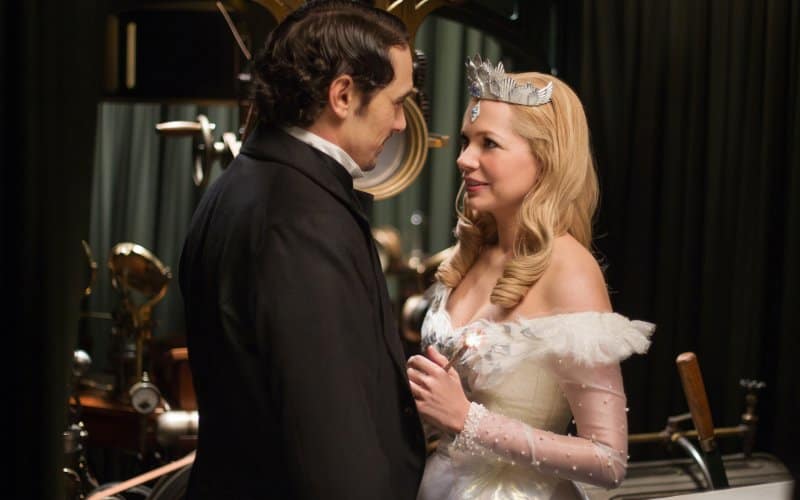 Are you prepared to have legions of little girls flocking around you?

Michelle: There are these little girls, the Quadling children, and I would walk by them in full costume, you would just hear “awww!! ohhh!!”  and they were  really shy, waving (Michelle mimics the shy wave).  I hadn’t entertained this possibility at all, that I would delight young children. I was thinking about delighting one young child, and I didn’t realize there would be more than one.  And what feels better in this whole world than making a kid smile?  So that’s fine with me.

How do you balance your career with motherhood?

Michelle: I was afraid you might ask something like that.  How does anybody do it.  It is like an Olympian undertaking.  Okay, what have I figured out?

What have I really learned…  Um, they’re all such hard lessons, too, I find.  Like, when you really arrive at something that’s  true and honest, it’s taken you so long to get there, and you had to work so hard for it. It’s just not what you think it’s gonna be, and nobody really prepares you for it, and nobody really tells you the truth, which is that it’s not possible.

It’s not possible to do both things well at the same time, especially if you’re really critical and like ask a lot of yourself.  Every mother that I know asks a lot of themselves.  So what I’m trying to wrap my head around is this – get comfortable with the fact that it’s going to feel like a scale, and I’m never going to arrive at a perfect balance, and it’s always gonna be a give and take.

Something’s always gonna feel like it’s suffering, like it’s under served.  And that’s really hard on your heart, to feel like you’re not being the best parent that you could be, or you’re not being the best at your job that you could be. I’m really trying to get peaceful with the fact that I’m always going to feel like that and that is the equation, for as long as I choose to or have to stay in this position where I work and where I parent.

I try to figure out how to buy time where I can. This is a big epiphany for me recently.  I was like – I am not gonna wash my dishes before I put them in the dishwasher!!  I find it so hard to make some time for myself.  I am not gonna spend fifteen minutes pre-washing. Why would I do that?  I’m looking for time everywhere, in every corner, every day, and here I am pre-washing my dishes.  Not any more! Silverware, going in there!  Knives, going in there! (laughs) 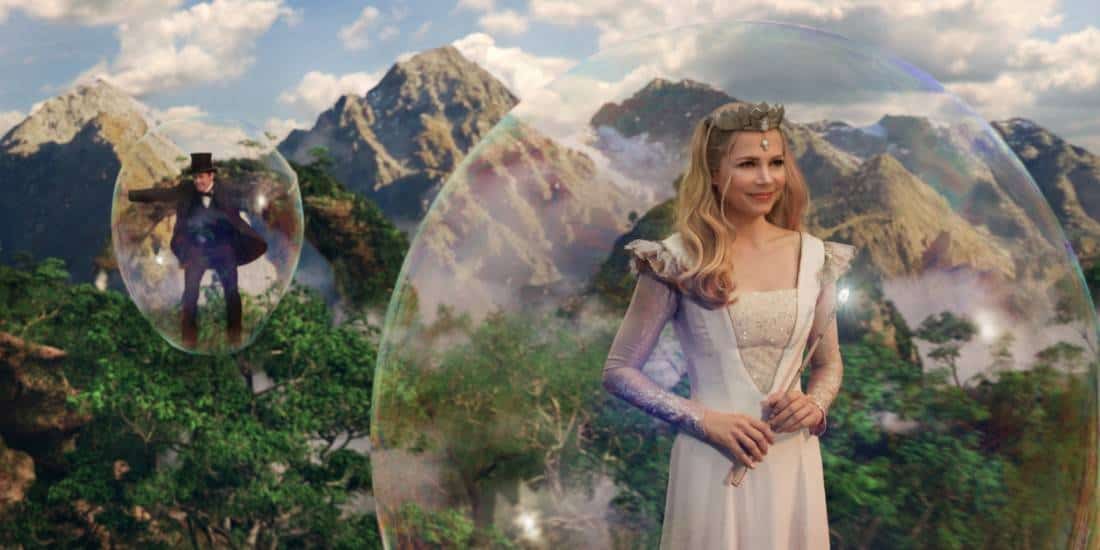 You were amazing as Glinda the Good Witch.  What was your inspiration?

Michelle: Thank you.  (Michelle pauses) I thought a lot about Glinda, and I’ve watched that movie passively for years. But Sam (Raimi, director) said something really interesting to me in the beginning.  He said there’s a reason that Glinda the Good Witch doesn’t go down the Yellow Brick Road, and that she’s not on the journey, because she’s one dimensional.  She needs to learn about herself and thus she’s the least relatable character.  And I thought that’s a good point.  We don’t want to do that.  We want people to feel like they’re on a journey with Glinda too, and that she isn’t this sort of crystalized version who knew it all along.  We want her to have struggle, we want her to be human.  But what does she have to struggle with – because she doesn’t have a split nature.  How can she still be good and innocent, and believe the best in people, but still have a struggle? She’s struggling for the freedom of these people [The Quadlings]. She’s also struggling a little bit with her own self doubt.

I thought a lot about transformation.  She’s not somebody who’s had a perfectly easy ride.  She lost her father. She’s in charge of  these sort of refugees, but she doesn’t really know how to protect them. I can’t say that those aren’t things that I’ve weighed in my life.  And so I thought a lot about transformation and how Glinda transforms these dark and dire situations. I thought about her as somebody who transforms tears into bubbles, that she makes the best out of a rotten situation because of a way that she chooses to look at it.

It is a super-human quality, although I have seen it on Sam [Raimi], our director.  By the way, one wife, five kids!  It’s amazing.  He’s such a cool guy.  But he had that attitude, you know.  It’s a really tough job to make a movie that’s this big.  Can you imagine a hundred and fifty people, all their personalities, all their jobs, all their questions – and Sam is the funnel for all of it.  And he maintained this exuberance and this buoyancy, and this belief in the possibility. He was interested in what everybody had to say. I think a lot about my daughter. I thought a lot about Sam as kind of Glinda the Good Witch.  And I thought about, like, Joan of Ark and, you know, heroes.

Right before she left the room we took a group photo and thanked her again for her candidness in the interview. She then warmly turned to us:

Michelle: You guys, thank you.  I never really posted anything on a blog because I don’t really know how to, but I, I think that, you know, I think every mother has the same question that we were all asking – how do you do it?  How do you be a mom, and be a parent, and maybe even try and be in a relationship, and the end, also be, be yourself? Providing this kind of conversation about it [blogs], and like this kind of access to it is awesome.  So thank you for doing it.

Michelle was downright charming and such an extraordinary talent. It was truly an honor to be a part of interviewing her. 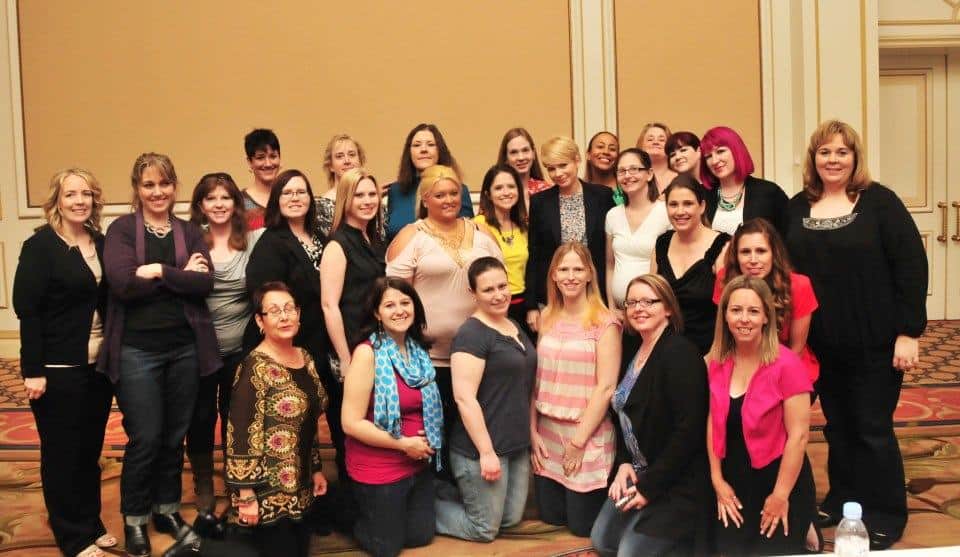 Thank you to Inside Out Motherhood for the photos
Disney provided me with an all expenses paid trip to Los Angeles to attend the red carpet premiere of Oz: the Great and Powerful and to attend a Wreck-It Ralph press day at Disney Animation studios. All opinions expressed are 100% my own.
Click here to cancel reply.