This is a sponsored conversation from Mums the Word Network and The Stork OTC. All opinions are my own.

That’s how long it took to conceive my twins. They were the longest years of my life.

When my husband and I were first married we decided to wait a couple of years to try to conceive. When we were ready we tried. And tried and tried. And nothing happened. I went to my doctor and she said to keep trying, put me on clomid and sent me on my way. Two years later I didn’t have any answers and wondered if parenthood was even for us. We took a break because any more intervention would have been too costly.

We move to Portland, my husband got a great job with great insurance and I got a new doctor. After a year of trying again I was referred to a fertility clinic, which happened to be one of the best in the country. After 3 years, 2 surgeries, and countless blood tests we went our final route of trying to conceive – IVF.

IVF included multiple injections daily, close monitoring with my doctor, and hoping & praying. We only had one shot – we had depleted our savings. Even with some insurance coverage, IVF isn’t cheap. All in all we spent about $30,000 on our TTC journey. But it worked!

The moment I saw those 2 lines on that home pregnancy test I knew my life had changed forever. And when we saw not one, but two heartbeats on that ultrasound monitor we both cried tears of joy. Now our twins are 7 years old and thriving.

My story isn’t everyone’s story. Most women can conceive with little intervention from their doctor, but for those who need a bit more help there is Stork OTC.

The Stork® OTC is the only conception device FDA cleared over-the-counter for use at home that is designed to help you with becoming pregnant during your fertile window. The Stork® OTC includes two familiar elements: a cervical cap inside of a condom-like sheath (the Conceptacle®) used to collect the sperm and an applicator device (the applicator) used to place the cap (similar to the delivery of a tampon). After collecting the semen in the cap, the applicator efficiently and easily places it near the woman’s cervix. The cap stays in place, keeping the sperm where it needs to be, for up to six hours, while the woman continues her normal routine, then is easily removed with the attached cord, similar to tampon removal.

It’s basically an IUI (intrauterine insemination) without having to spend as much as $800 a cycle to do it. Stork OTC is cost effective at $79.95 and available right over the counter at Target.

If Stork OTC was available when I was trying to get pregnant it may have saved us a lot of time and heartache. For those of you who are trying and have been unsuccessful this may be the answer to your baby prayers.

Join me for a Twitter Party! May 23rd 8pm EST #TTCWITHSTORKOTC 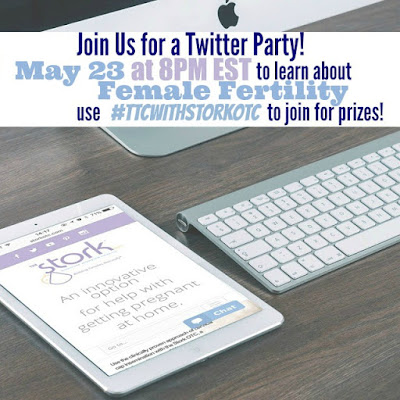